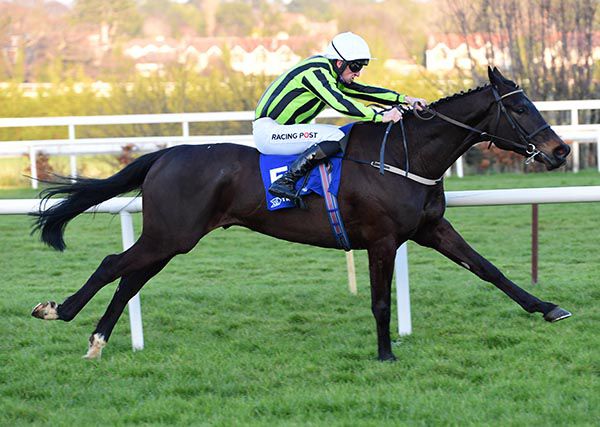 Clear pace setter Lake Winnipesaukee unfortunately took the wrong course on the approach to the straight with Aaron Fahey (got a 14 day ban) putting the promising Arcadio newcomer on to the chase track.

He seemed to soon realise they'd gone the wrong way, pulling up, and back where the real action was unfolding Patrick Mullins was noted making his move to lead on Dark Raven two furlongs out.

Ridden clear over a furlong out the Paddy McCormack-owned Malinas four-year-old kept on well to beat Silas Mariner by seven and a half lengths.

“He’s a nice horse, a bit backward and we hadn’t asked him too many questions at home so I was pleasantly surprised he could do that. He might have been a bit fortuitous with the one in front running out,” said the winning trainer.

“Patrick said he was green but quickened up nicely.

“He’s a fine big horse who will jump a fence. I’m looking forward to getting him over jumps.

“His main aim this season is the George Mernagh bumper at Fairyhouse over Easter.”

Mr A.P. Fahey, rider of Lake Winnipesaukee trained by P.G. Fahey, reported to the Clerk of Scales that his saddle had slightly slipped forward during this race.

The Stewards interviewed Mr A.P. Fahey, rider of Lake Winnipesaukee, trained by P.G. Fahey, concerning the fact that he had left the Flat race track and taken the steeplechase course before the home turn this being the wrong course.

Evidence was heard from the rider concerned who stated that his saddle had slipped forward, that his mount had been too strong to ride and through a lack of energy he was unable to steer his mount around the final bend on the correct course.

Having viewed the recording and considered the evidence, the Stewards were of the opinion that Mr. A.P. Fahey had been negligent by his misjudgement of the correct course for this race and therefore had failed to attain his best possible placing this being a breach of Rule 212 (A)(iv).

Having taken his clean previous record into consideration, the Stewards suspended Mr. A.P. Fahey for 14 racedays. Furthermore they reminded Mr. A.P. Fahey of his responsibility to report anything that may have affected his mounts performance in accordance with the provisions of Rule 213.