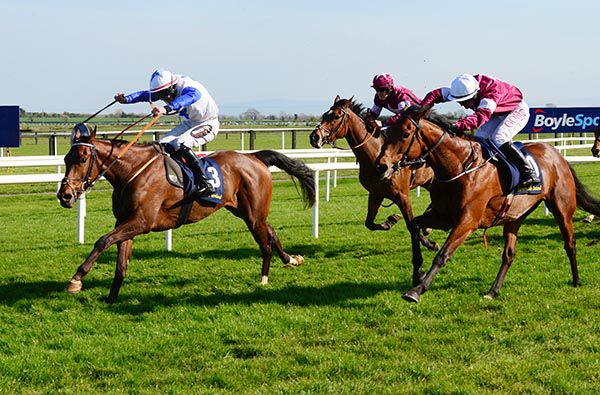 Uhtred absolutely thundered home in the final furlong to get up and land the Tattersalls Ireland George Mernagh Memorial Sales Bumper at Fairyhouse.

The 4/1 favourite gave Joseph O'Brien a first and last-race double on the card.

Uhtred had a colour change and sported the second colours of Gigginstown who recently purchased him.

He was fully 10th racing around the home turn with three furlongs to go and was switched out by Tom Hamilton entering the home straight.

He was ridden coming to the final quarter of a mile and made good headway to fourth passing the furlong pole.

The son of Fame And Glory rocketed home to get up in the closing stages to win by three parts of a length. Chuvelo (18/1) was the horse in second who was mowed down by the winner. Fantasio D'alene in Gigginstown's first colours, finished third at 14/1.

Joseph O’Brien said: “I think he got tightened up at the start and ended up a bit further back than we had expected. It was obviously a messy enough race but he quickened up well.

“He was bought (by Gigginstown) just in the last few days. He’s a well-bred horse by Fame And Glory and you would be fairly impressed when they do that first time out. He has an engine and has been working nicely.

“I’d say we’ll leave him off now and I don’t think he has to do anymore (this season).”