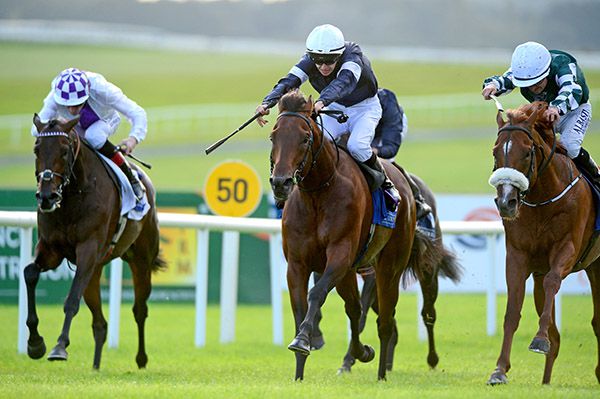 Buckhurst (11/2) held on by an ever-dimishing head to land the Group Three Royal Whip at the Curragh. Leo De Fury (7/1 from 10/1) kept cutting into the deficit in the final furlong but couldn't quite get on terms and had to settle for the runner-up berth. Guaranteed was a length and a half way in third at 12/1.

Sir Dragonet, the 4/9 favourite, came in fourth on his first crack at a mile and two furlongs having finished a close fifth in the Epsom Derby in June.

“He's very tough and tries his heart out,” said jockey Donnacha O'Brien who sealed a double on the card.

“I probably committed him a little bit early and he got a little bit lonely in front but when the Harrington horse came to me he found again.

“I thought I'd get to make the running but Kevin's horse seemed to be keen so he went on and I was happy just to take my horse to his outside and get a lead off him for a bit longer.

“I was always going to be forward and keep it simple.

“Once the runner-up came to me my horse found a little bit more, he was probably getting a little bit idle in front.”

When asked about future plans he replied: “I'm sure he could be on his travels but I've no idea and I'll leave that to them.”

Paddy Power shortened Buckhurst from 20/1 to 14/1 for the St Leger.