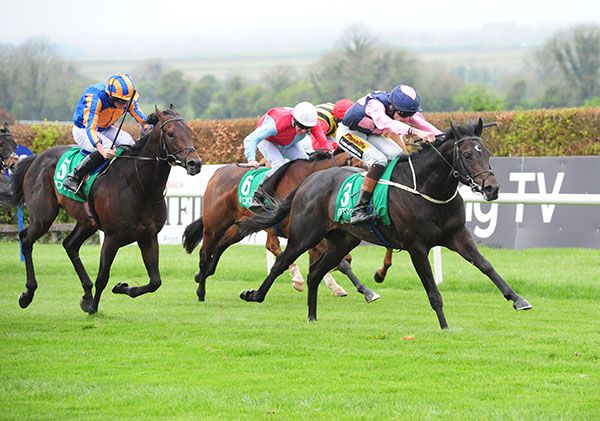 Donagh O'Connor reached a career high when winning the Listed Committed Stakes at Navan on Inverleigh (11/2 out to 6/1).

Owned by Antoinette Kavanagh and Michael Downey, Inverleigh was one of two representing Ger Lyons in this five and a half furlong event.

Glenburnie's Chicago May (13/2 into 5/1) could manage only sixth under Colin Keane, whilst up front Inverleigh accounted for favourite The Irish Rover by a length and three parts. Cava got no run and she was unfortunate, a nose back in third.

"Shows nothing at home and neither does the filly (Chicago May) but the filly is very difficult," reflected Lyons in the aftermath.

"When we were declaring and Colin (Keane) said he was riding the filly I was a tad surprised. Then Gary (Carroll) went to ride for Joe (Murphy on Gustavus Weston because he liked what he was seeing at home.

"It's nice for Donagh (O'Connor), he rides out for us once a week and has plenty of ability and that's his first stakes win in his second ride in a stakes race. It's good to give them all a chance.

"They were literally going through the motions at home and today was about blowing the cobwebs away and see where it lands, no expectations. Thankfully he has done it well. It's a nice surprise.

"We might have a little go at seven (furlongs) somewhere along the line.

"The filly has run well and will improve for it and go for the fillies' race next week."

Under the provisions of Rule 90, the Stewards allowed Chestnut Express trained by D.J. Bunyan, to run on receipt of the trainer's written assurance that the error identified in the certification of vaccinations would be corrected in accordance with Rule 91 within the timeframe specified.