O'Keeffe doubles up on Winters' mare 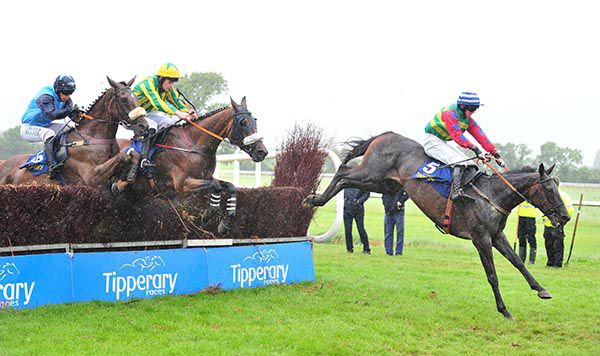 Shes Flat Tothemat bridged a losing run stretching back over 16 races and nearly two and a half years when taking the Jim Ryan Racecourse Services Handicap Chase at Tipperary.

Darragh O’Keeffe, successful earlier on Ocean Glandore completed a double on the afternoon as the 11/2 chance led approaching the last and kept on well to score by a length and a quarter. Daisy Chicks filled the runner-up berth, with Allied Victory another two and three quarter lengths back in third and Hard Bought completing the places in fourth.

Winning trainer Mick Winters said, “She’s a six-year-old mare and she’s around a good while. We always thought she was a good jumper. She’s not the biggest in the world so maybe the experience is standing to her at this stage.

“We probably over-raced her and we gave her a break since Downpatrick. When the ground gets deep she won’t go on it but she’ll make a lovely broodmare down the road.”