O'Keeffe puts another double on the board 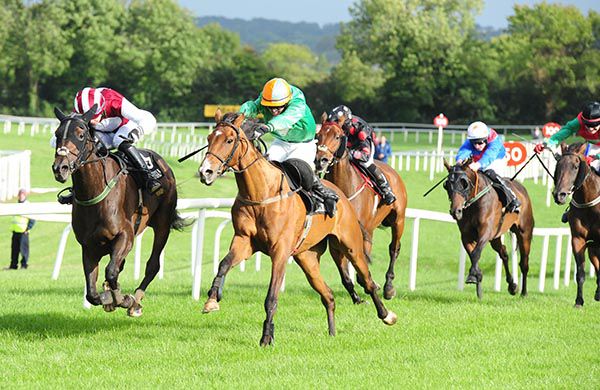 Darragh O’Keeffe completed a quick 39 and a half to one Kilbeggan double aboard Mon Storm in the Adare Manor Opportunity Handicap Hurdle.

The Cork rider won the preceding heat for Andrew McNamara senior on Lessofdnegativity and here he was aboard Mon Storm for Victor Wilson. Roxys Holly looked almost home when leading from the last but she was mown down on the line by Mon Storm.

“I knew it was tight but I thought my lad had his head in the right place at the right time. He has the heart of a lion, and I’d say you couldn’t get a trip long enough for him as all he does is stay galloping," said O'Keeffe after riding his third double in the space of 11 days.

“At the fourth last you would say I was going to finish a bad fifth or sixth but he kept digging for me.

“People were saying his best runs were around Sligo but he also ran a cracker in Down Royal one day for me. Victor does a great job with him.

“Things are flying at the moment and hopefully we can keep it going.”

The Irish Horseracing Regulatory Board Veterinary Officer examined Callthebarman trained by Gavin Cromwell, at the request of the Stewards and reported the animal to be post race normal.

The Irish Horseracing Regulatory Board Veterinary Officer examined Josephina trained by Anthony Mullins, at the request of the Stewards and reported the animal to be lame on her right foreleg post race.