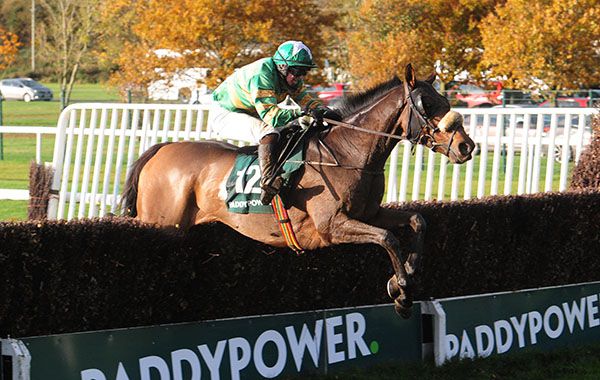 Darragh O'Keeffe rode out his claim in style at Cork today as the jockey landed the Grade B Paddy Power Cork Grand National on the J.P. McManus owned, Michael Hourigan trained The Gatechecker

Teenager O'Keeffe has been in a mini-sensation this season and while there might not be many takers at bookmakers' odds of 25/1 to be Champion Jockey this season, today's big-race success moves him to the 45 winner mark for the season, just five short of leader Paul Townend.

Today O'Keeffe produced enigmatic The Gatechecker, pulled up at Gowran just last month, to lead jumping the final fence and at the line the pair scored a seven and a half lengths win over Glorious Galway

Trainer Hourigan previously won today's feature race in 2005 with the Nina Carberry-partnered A New Story and following his second success stated “I always thought he'd win a big pot but recently I thought it was slipping away on him. It arrived now and we'll take it and he has been a good servant.

“I don't know was today a plan as he was to run at Clonmel on Thursday but I rang Frank and said we'd better put him in the Cork National and see, so it was the right decision.

“I was talking to Enda Bolger (trainer and O'Keeffe's employer) at a point-to-point earlier today and he said to me 'that young fellow is looking forward to riding him today', although he must have known more than I knew!

“He is a good kid and you'd have winners if you had him.”

The win was O'Keeffe's third at Grade B level, having steered Bolger's Ballyoisin to a pair of similar wins in the past year.