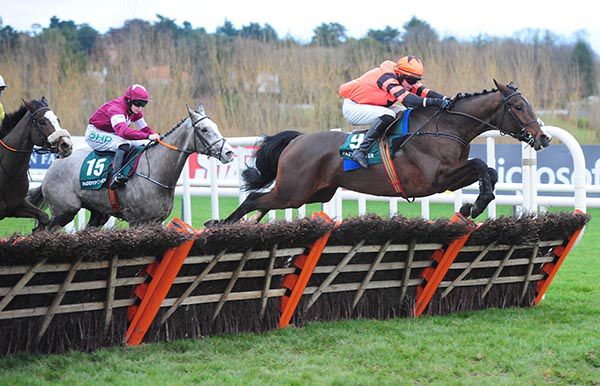 Jetez on his way to victory
© Photo Healy Racing

Sean O'Keeffe was seen to good effect on Jetez as he ran out a convincing winner of the two-mile handicap hurdle at Leopardstown this afternoon.

The 7lb claimer had his mount prominent throughout and sent the 11/1 shot for home going to the last in the €30,000 contest.

“He deserved it as he's run two solid races this year,” said Harrington.

“Bringing him back to two miles and a lighter weight has suited him. I'd say we'll come back here for the good handicap hurdle in February.

“He'd been going two-and-a-half and I said there was no point hanging around. It was lovely the way it worked out as he got a lead the whole way until the last.

“Sean has a great head on him. He comes into me a couple of days a week and he's great.”