O'Neill a more than able deputy on Ucello Conti 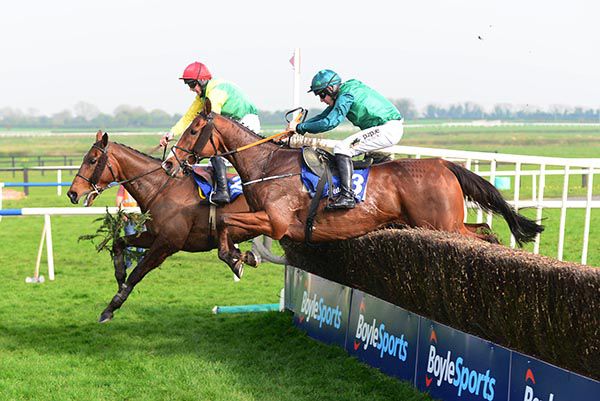 Ucello Conti, near side, sweeps past Sizing Coal at the last
© Photo Healy Racing

Sizing Coal and Mark O'Hare had attempted to win from the front and looked in charge coming to the last but got it all wrong and lost his momentum.

Ucello Conti, who was chasing him in second, swept past on the run-in and galloped in under Barry O'Neill by three and a half lengths.

Sizing Coal had to be content with second at 9/2 from 6/1. Coastal Tiep (6/1 from 9/1) ran well in third without quite reaching the leaders.

Gordon Elliott said: “Barry said he was only getting going. He said he felt great and he thought he would have won anyway.

“I'll talk to Simon (Munir) and Isaac (Souede) and see what they want to do next year but he's been a great horse and has been unlucky that he hasn't won a big handicap chase somewhere.

"It's nice for him to get his head in front in a few races.”

Barry O'Neill added: "I felt I wasn't beaten (at the last). I was better than Mark at it but I wasn't as fluent as I would have liked to have been.

"As you've seen in his previous runs he always does his best work towards the end so it was up in the air a bit.

"That's my third spin on him and lucky enough my third win. I wouldn't be riding him today but for Jamie (Codd) being suspended. I'm delighted to be picking up the pieces.

"Jamie looked after him so well in Aintree and but for that he wouldn't have been so well today. Credit to him."

The Stewards interviewed Mr B. O'Neill, rider of Ucello Conti (FR), concerning his use of the whip in the latter stages of this race. Evidence was heard from the rider concerned. Having viewed a recording of the race and considered the evidence the Stewards were of the opinion that Mr B. O'Neill was in breach of R10(3)(g) by using his whip with excessive frequency, R10(3)(f) by using his whip with excessive force and R10(3)(e) by hitting his mount other than down the shoulder or on the hind quarters. Having considered his previous record, the Stewards suspended Mr B. O'Neill for two race days.