O'Brien doubles up with Startedwithakiss 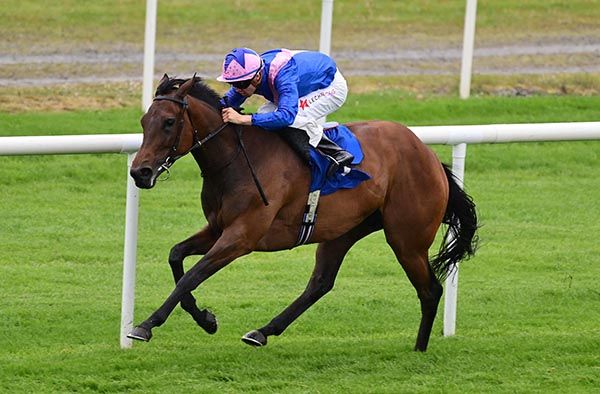 The winning of Roscommon's fillies' maiden was at the gates as Startedwithakiss began smartly while the favourite The Model Kingdom completely missed the break.

Startedwithakiss was soon content to take a lead from Forever My Girl however, The Model Kingdom had to be dropped in at the back of the 10-runner field.

Startedwithakiss took aim at Forever My Girl entering the home straight and soon raced on by her on the approach to the final two furlongs.

The Model Kingdom, who was fully 10 lengths off the leaders with half a mile to go, made good headway at the two pole but had plenty on her plate in pursuit of the clear leader.

Dylan Browne McMonagle took a peek over his shoulder on the leader passing the furlong pole and drove his mount home by an eased-down five lengths at 5/2.

The Model Kingdom (5/6f) could make no further inroads in second. Beautiful Chaos was another three and three quarter lengths away in third at 25/1.

This gave Joseph O'Brien a double on the card as he was also responsible for the winner of the preceding race, Swan Bay

Assistant trainer Brendan Powell said: “She did it well and I thought it was an intelligent ride. He said they went a nice pace early and then slowed up.

“He said he thought he'd go on as he knows this filly stays. I think when he kicked he nicked the race, the second was a fair way back at one stage.

“She's won now and she has got a good pedigree. Dylan said she'd have no problem going further, her job is done but there is no reason why she couldn't go and win again.

“Sligo the last time didn't suit her, everything was happening too quick for her, and on her first run she was a bit big after a long break and needed that.”