One Cool Poet writes another script in Curragh 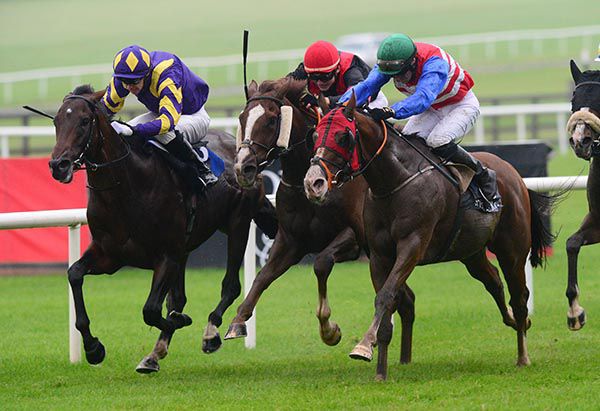 Galway hero One Cool Poet (12/1) put the seal on a tremendous season by storming home in the concluding race of Irish Champions Weekend - the 150,000 euro 'Northfields' Handicap.

The seven-year-old gelding has to be ridden cold and only had five horses behind him at the two pole in this 16-runner race.

He made good headway between horses a furlong and a half out and arrived on the scene in third with a furlong to go.

Trainer Matthew Smith said: “The bubble was burst yesterday. I was expecting him to run a lot better than he did. Billy came in and said he was too fresh and too keen, didn’t get home.

“I said we’ll see how he is in the morning. When he fell out of the stalls and was at the back, I had my head in my hands. Then he started to pick up but I still didn’t think he’d get there. When he did get going he really flew.

“My confidence was gone after yesterday and I’d say people were saying he’s mad in the head (running him again).

“I gave him 10 days off after Galway and I’d say I nearly gave him too much time off. He needed every bit of work I could get into him. He’s a bulky sort of horse.

“We were going to run him over hurdles in Bellewstown but then I thought why risk him getting a knock (before this weekend). He is the sort of horse you need to be racing.

“I couldn’t imagine myself winning a Premier Handicap here at the Curragh. Our expectations weren’t that big today and we were going to go back over hurdles after this. It’s just brilliant, and we might have a re-think now.”

Billy Lee said: "I tell you I love riding him! For some reason he was just keen yesterday. Today they went a good gallop and he switched off. I just rode him cold and he came through and the turn of foot he has shown - he's a legend of a horse!

"He didn't run a bad race yesterday, he probably didn't see out the mile and five being so keen but I'm delighted for the lads."

One Cool Poet won three races in a week at the Galway Festival for Smith before finishing 10th in the 'Petingo' Handicap at Leopardstown yesterday.