Orr doubles-up on The Names Jock 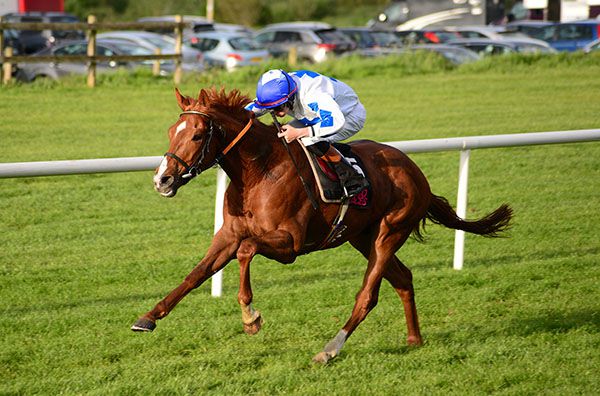 After winning the fifth on Olay Power Oisin Orr doubled his tally on The Names Jock in the Sligo Races Hospitality Handicap.

Successful at Cork on his penultimate start, the John Kiely trained chestnut since disappointed at the Mallow circuit, but was expected to bounce back this evening, going off a well-backed 11/4 favourite (opened on-course at 7/2).

Owned by Brian Gleeson, of ITV Racing and RTE Racing fame, the Famous Name gelding was settled behind the leaders on the inner and was fifth with a circuit to race.

He was pushed along and came with his challenge over a furlong from home, soon getting to the front before powering clear to score easily by four and a quarter lengths.

Top-weight Fujimoto Flyer (5/1) was a clear second best under Ronan Whelan for Emmet Mullins, while 33/1 chance Olympic Honour was another three lengths away in third.

"He's an improving horse I think. I was hoping the ground was going to be as good as it was as he wouldn't like it if it was firm," said Kiely.

"Hopefully he might win another one and then we'll give him a chance and go hurdling. He'll make a nice hurdler.

"We'll let him get over this race and then make a plan."

Orr revealed afterwards that he has just one winner left before riding out his claim.

The Irish Horseracing Regulatory Board Veterinary Officer examined Royal Canford trained by W. McCreery, at the request of the Stewards and reported the animal to be post race normal.