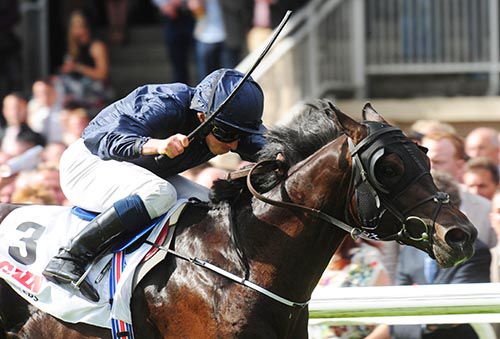 Aidan O'Brien saddled his first winner of the Railway Stakes for six years when Painted Cliffs delivered in good style under Ryan Moore.

Between 1999 and 2009 O'Brien trained 10 of the 11 winners of this race with only Jim Bolger's Democratic Deficit breaking the domination in 2004. However, Alfred Nobel in 2009, was O'Brien's last winner of this six furlong Group Two before today.

Painted Cliffs went off 7/1 as a strong word at the track for Jessica Harrington's Rockaway Valley saw his price slashed to 11/8 favourite on the off. Log Out Island broke smartly and led as Painted Cliffs tracked him in second with Argentero close behind in third and Rockaway Valley fourth. Saafarr was pulled up at halfway when trailing in rear.

Painted Cliffs drew upsides a couple of furlongs out and moved on with a furlong and a half to negotiate. Moore drove him clear inside the last furlong and the pair put two and three quarter lengths on Rockaway Valley.

The runner-up was off the bridle beyond the two pole and could make no impression on the winner but stayed on for second, ahead of Log Out Island.

Ryan Moore said: "I was very impressed with him. He travelled very well and I thought really I just had the Godolphin horse (Log Out Island) to beat. I got him off the bridle and I was there too soon. It was impressive. He's a nice colt."

Aidan O'Brien said: "We liked him before he ever ran but he disappointed the first day and Joseph said he was very idle and babyish. We put the blinkers on him at Leopardstown to help him concentrate, and I wasn't sure if it was just a bad race or that the blinkers worked.

"Ryan said he's a very nice horse. He likes him. Maybe we could leave the blinkers off him in future."

Painted Cliffs was given a first show of 25/1 for the 2,000 Guineas by Paddy Power and BoyleSports.

This was Aidan O'Brien's 12th winner of the Railway Stakes. Vincent O'Brien holds the record with 14 victories.