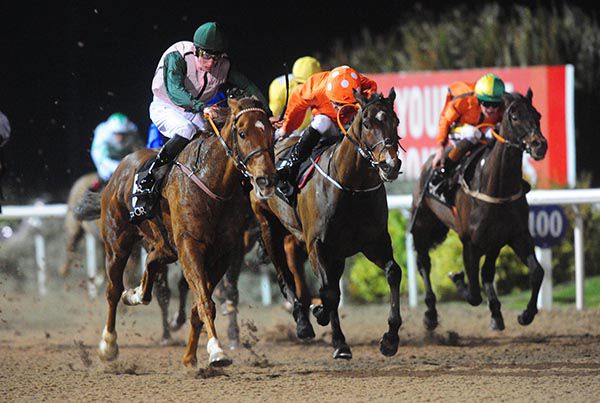 At the age of nine Park Row (9s into 7s) defied a career high mark to win the BetVictor Handicap over a mile and a half at Dundalk.

After the night’s fifth event on the polytrack many were of the view that Markhan (6/1) had come out on top.

However the photo finish showed that Denis and Ross Coakley’s Park Row had ‘nosed out’ Markhan with three lengths back to Kerosin (11s into 8s) in third.

Denis Coakley said afterwards: "He's a dream of a horse. He's a fine big horse and he started off as a National Hunt horse. His first two runs were in bumpers but it didn't work out for him that way.

"He knows how to win and he is so consistent. We are so lucky to have him.

"He travels very strong all the time. He's a beautiful, strong mover of a horse and he always travels maybe even a little bit too strong. I was worried he was maybe doing a little bit too much, it was great that he had the horse to chase.

"To be honest we were quietly confident, he had worked well on Monday and the only thing in the back of my mind when they are running a long time is if you go once too much.

"I was desperately worried (at the finish), I would have gladly settled for a dead-heat!"

Other owners are Denis' father Pat Coakley and Dr Joe Costello who is on the committee of Galway racecourse.

"The horse carries the colours of Joe's grandfather. Joe's father Joe always wanted to get a horse and get those colours again but unfortunately he died young. So when we got this horse we got the colours back," further explained the successful handler.

W.M. Lordan, rider of Rips Dream trained by Patrick J.Flynn, reported to the Clerk of Scales that his mount hung left.