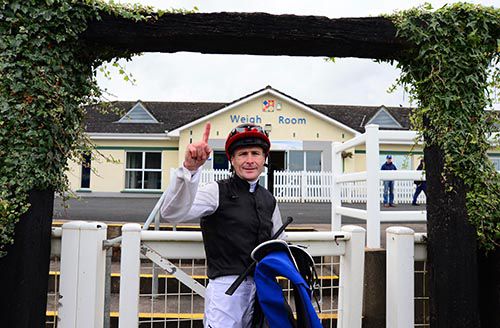 Multiple Group One-winning rider Pat Smullen has announced his retirement from the saddle.

Smullen, 41, was diagnosed with pancreatic cancer in March last year and has been undergoing treatment.

While his progress remains positive, he said in his weekly column for thoroughbreddailynews.com: “I have had a frank discussion with my doctors and I gave them the full details of the way of life of a jockey, and what I’d have to go through to get back to full fitness, to get back to the weight that I need to be, and to compete at the level I want to compete at.

“They advised me that I should not compromise my immune system in any way. So, taking that into account, the right thing for me to do is to call it a day.

“I’ve been very fortunate through my career to meet some great people and to ride some very good horses.

“I have a lot of cherished memories of a great career, and I’m very thankful for that. Now it’s the second chapter of my life. I think everyone has gathered by now that horses are everything in my life.

“I know nothing else and I’m determined that I’ll still work within the industry and, hopefully, I can be of some benefit.”

Champion jockey in Ireland nine times, Smullen has long been associated with Dermot Weld, enjoying success on a global scale with the master of Rosewell House.

Derby glory at Epsom came their way in 2016 with Harzand, who followed up in the Irish Derby at the Curragh — a race the pair also won with Grey Swallow in 2004.

Refuse To Bend was Smullen’s first Classic winner when lifting the 2000 Guineas at Newmarket in 2003.

Like Free Eagle, another star for Weld and Smullen, Refuse To Bend raced in the famous silks of Moyglare Stud.

Moyglare’s breeding advisor, Fiona Craig, said: “What a star Pat has been and still is. I think this news has been coming for a while and I know Pat is happy and comfortable with it now.

“I’m sure he’d have liked to go out on his own terms and gone out with a Group One winner like Ruby (Walsh) did last week, but he’s alive and that’s the main thing after what he’s been through.

“Pat has ridden for Moyglare for over 20 years and his first Group-race success for the stud was on board Token Gesture in the C.L.Weld Park Stakes at the Curragh in 1996. I remember we had two in the race, with Mick Kinane on Absolute Glee, but it was Pat who came out on top that day.

“Moyglare have only had two retained jockeys in Mick and Pat and he has been a great friend and a great jockey.

“He’ll always be a huge part of Moyglare. He’s ridden most of our mares and most of their offspring and he’s a great sounding board.

“We’ve had some great times and I’m sure Pat will continue to ride out as he moves into the next chapter in his life.”