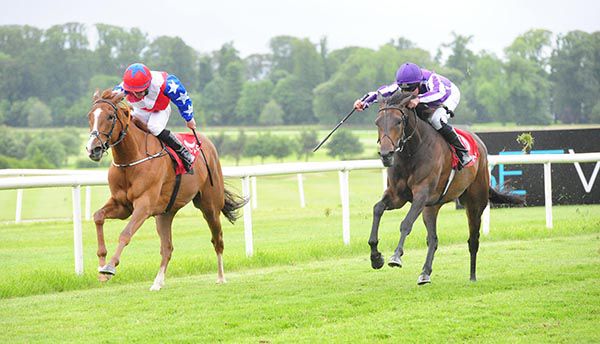 Favourite Angel’s Amy gave it a good go from the front but she was mown down late by Flowering Peach (8/1) in the Irish Stallion Farms EBF Fillies Maiden at Gowran.

On start four the 75-rated Ballydoyle victor was ridden by Seamie Heffernan, and she was one of two strong finishers. Timemakesitfine also gave plenty of encouragement for the future, a neck back in third, and they drew seven lengths clear of the fourth placer Kiss For A Jewel

“We always liked her and we knew she was a little bit weak, so hopefully she’s going to strengthen up into a Stakes type. She has a really good attitude," said Heffernan on the half length scorer.

“She’s honest and we always knew that she was a winner waiting to happen. They have good pedigrees so they have a chance of making up into something.”

B.M. Coen, rider of Crystal Dawn trained by J.F. O'Shea, reported to the Clerk of Scales that his mount hung badly left.