Pepper too hot for Tipperary rivals 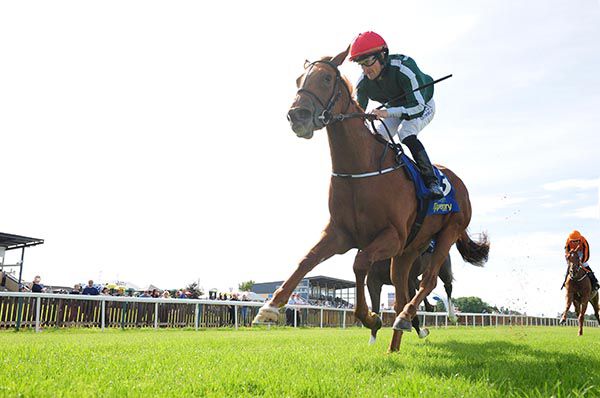 Cayenne Pepper made it two from two in the opener at Tipperary this evening, the Glenvale Stud Race.

Successful on debut at Leopardstown last month, the Jessica Harrington trained filly was well-fancied to follow-up today, going off the clear 4/9 favourite, having opened at 4/6 on-course.

Soon sent to the front by Shane Foley, the chestnut daughter of Australia made virtually all.

She was pressed by Royal County Down from the two furlong pole, but kept on best under pressure in the closing stages, prevailing by a length.

The aforementioned Royal County Down (2/1) had to settle for second under Donnacha O'Brien for his father Aidan, while Lougher was another three lengths back in third.

Foley said afterwards: "I really like this filly. She is workmanlike and only does what she has to and is the very same at home. It wasn't ideal making the running but I didn't want it turning into a sprint.

"I was only nursing her up the straight and was hoping Donnacha would come to her but he never did. She is a grand filly and the ground is quite quick out there and you'd feel it on them. She was feeling it a bit.

"It's nice for her to step forward and I wouldn't drop her back in trip but she could step up. She'd also be better in a better type of race getting a lead."

The winner is owned by Jon Kelly and was bought for 195,000 guineas as a foal.