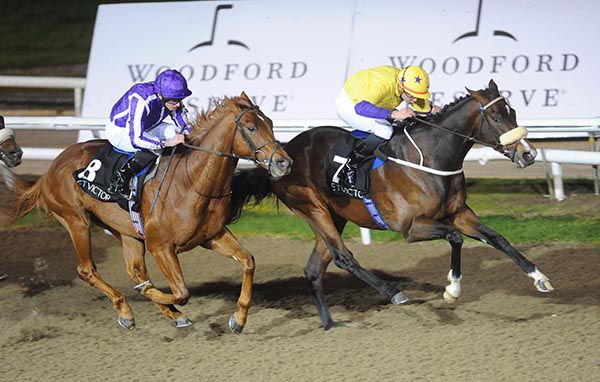 Playa Del Puente, well-backed into 11-4 against O’Brien’s uneasy 6-4 favourite Western Australia raced in third until pouncing late in the Listed mile contest — which is one of the few European qualifiers for the Kentucky Derby.

Western Australia chased Colfer Me into the straight and was then marginally impeded a furlong out as the long-time leader leant left into him. But Playa Del Puente, under Ronan Whelan, was a deserved and convincing half-length winner — following up victories at the course in October and December.

The best O’Brien could manage this time, however, was the runner-up spot achieved by Western Australia — following his third to stablemate Magna Grecia in last year’s Group One Vertem Futurity Trophy at Doncaster.

O’Brien’s son Joseph saddled Numerian to stay on into third — a further one and three quarter lengths back — but the fourth running of the Patton belonged to Halford’s Playa Del Puente.

The trainer explained the colt’s future lies overseas, after his four career starts to date in Ireland, with his Hong Kong-based owner Huang Kai Wen.

“We sold him after his first run, and he kindly left him with us,” said Halford.

“He’s going to Hong Kong now, and will probably travel out in May.

“That was always the plan. They will take their time with him, and I’d imagine they want him for the Hong Kong Derby.”

Halford is confident Playa Del Puente will continue to progress, wherever he runs.

“He’s a bit fresh in himself and raced a bit keen early on — (but) he’s on the improve the whole time, and we are very grateful to have kept him.

“He’s still quite light, and there is plenty to come from him. He has a big heart and a big engine.”

The Stewards enquired into an incident in the closing stages involving Colfer Me, ridden by S. Foley, placed fifth, Playa Del Puente, ridden by R.P. Whelan, placed first and Western Australia, ridden by R.L. Moore, placed second, where it appeared interference occured. Evidence was heard from the riders concerned. Having viewed the recording of the race and considered the evidence, the Stewards were of the opinion that any interference was accidental in nature and took no further action. Mr. P.N. Reynold (Chairman) absented himself from this enquiry and Mr. L. McFerran acted as chairman.

S. Foley, rider of Colfer Me trained by Joseph Patrick O'Brien, reported to the Clerk of Scales that his mount ran around in front.

The Irish Horseracing Regulatory Board Veterinary Officer examined Barys (GB), trained by Archie Watson (in GB), at the request of the Stewards and reported the animal to be coughing post race.