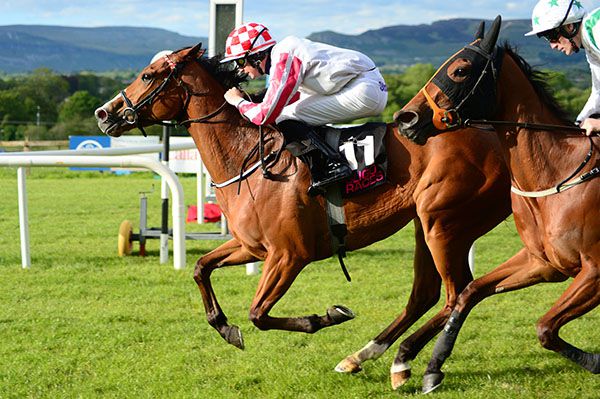 Olay Power made the breakthrough on her eighth start, as she took the second divide of the www.countysligoraces.com Handicap.

Given an initial rating of 62, the Eddie Lynam trained bay saw her mark tumble after disappointing efforts at Dundalk.

She again failed to make an impact on her most recent outing at Navan, and was dropped another two pounds to a rating of 52.

Available at 15/2 this morning, the daughter of Acclamation came in for some market support, opening on-course at 6s, before going off a 9/2 chance in the Sabina Power colours made famous by Sole Power.

Drawn on the rail in stall one, she was soon settled in second by Oisin Orr, improving to the front with just over a furlong to race. Isle Of Shadows soon threw down a challenge, but the winner kept on when ridden in the closing stages, with half a length separating the pair at the line.

The runner-up, on debut for Paddy Twomey, was returned a well-backed 6/4 favourite, having opened on-course at 11/4. Ebony Belle (12/1) completed the places, another three parts of a length away in third, with Mark Gallagher aboard this one for Pat Martin.

"On her work at home, she wasn't a superstar, but she worked okay. She ran like a drain the last couple of times though and I don't know why," said Lynam.

"If she repeated her homework we thought we'd be very close given where we were drawn. Thankfully it worked out.

"She's out of a half-sister to the dam of Sole Power. She's no Sole Power but it's nice to have something from the family still to go.

"There are only a handful of these three-year-old 0-65s and you'd be looking for something similar.

"I liked the way she travelled into the race but she gave me palpitations in the last 100 yards where she looked to run out of petrol or pull herself up for whatever reason.

"She got there like she was going to win well and in the end she fell in. She's a winner anyway and I like this place."

S. Foley, rider of Libras Power trained by M.Halford, reported to the Clerk of Scales that his mount hesitated when the stalls opened.

The Stewards interviewed M.A. Gallagher, rider of Ebony Belle, concerning his use of the whip in the closing stages of this race. Evidence was heard from the rider concerned. Having viewed a recording of the race and considered the evidence, the Stewards were of the opinion that M.A. Gallagher was in breach of Regulation 10.3(i) in that he had used his whip without allowing his mount at least three strides to respond. Having taken his previous record in this regard into account, the Stewards cautioned M.A. Gallagher on this occasion.