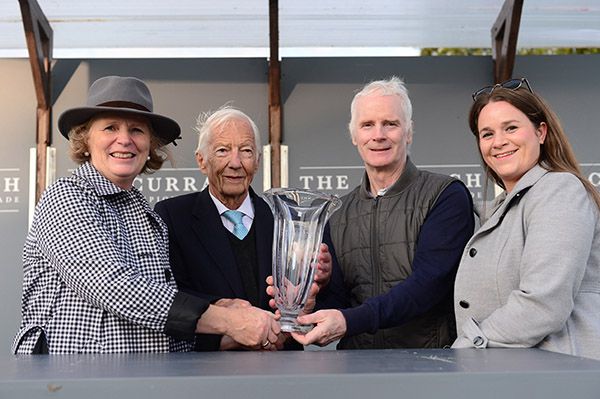 Sheila Lavery is hoping there is more to come from Ultra Pride after he opened his account with a fine front-running performance in the ten furlong handicap at the Curragh this evening.

Robbie Colgan gave the 8/1 shot a confident ride and kicked for home passing the two pole.

The Thewayyouare gelding galloped on strongly in the closing stages to post a two-and-a-quarter length victory over Takarengo who got up late for second.

Ultra Pride had run solid races in his three previous outings in handicap company and the winning trainer is hopeful he can prove progressive.

“He's a gorgeous horse, home-bred, and he's just needed a bit of time to strengthen up,” said Lavery.

“The girls were giving out to Robbie for giving him a bad ride. They said he kicked too soon. He was just laughing at them.

“We knew he stayed and he just decided to keep it uncomplicated. I think the horse like the bit of space because I don't think he liked it the race day when they all surrounded him.

“This was brilliant because it wasn't in the schedule but they just put it in. It was like manna from heaven when I saw it.

“He's a bit of an idiot to do things with at the races but he was better today. He got very upset in the stalls the last day and tried to climb out. Robbie got permission to go in late today.