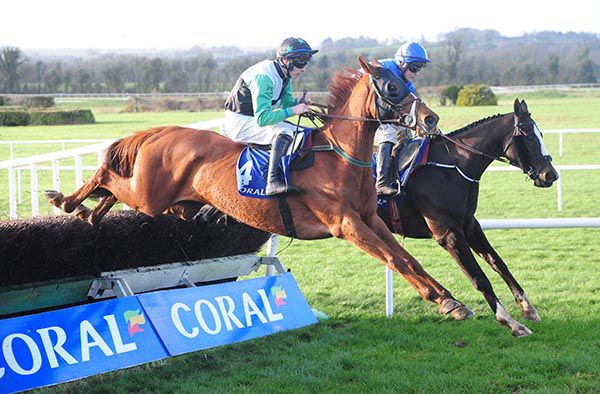 Lilshane (near side) and Kevin Brouder
© Photo Healy Racing

Lilshane certainly showed the better side of his nature when readily landing the Coral Bet 5 Get 20 In Free Bets Veterans Handicap Chase at Navan.

The Beneficial gelding was recording his sixth career win but has also proved a very quirky sort on more than a few occasions when refusing to race and running out.

Kevin Brouder’s mount was never too far from the pace and, having made a mistake four out, travelled sweetly to regain the lead at the next.

The 14/1 chance, available at 22/1 earlier in the day, drew clear before the last to win by a very easy six lengths.

Winning trainer Tom O'Connor said, “He's not a bad oul divil when he's on his A-game. He's very unpredictable but today he was super. He jumped off lovely and didn't even look at us, we're delighted with him.

“We've an awful lot of work put into him since Thurles, getting him to ride out on his own and taking him to the fields on his own — it's paid off. I hope he stays with that kind of temperament now.

“I was down at the start myself but I'm too old to run anymore! That bit of rain helped as well. We badly need rain.”