Rathvinden makes excellent return to action in the Bobbyjo 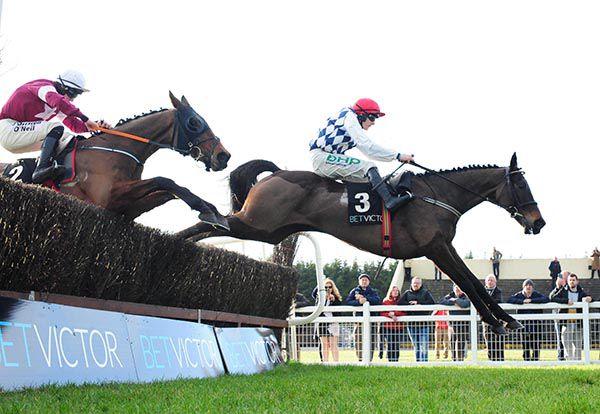 Willie Mullins and Paul Townend doubled up at Fairyhouse as the former champion jockey extended his lead over Rachael Blackmore at the head of this season’s standings after success on Rathvinden (9/2 into 100/30) in the Grade Three BetVictor Bobbyjo Chase.

Due to unsuitable ground conditions Mullins withdrew Pleasant Company but Rathvinden proved to be a very able stable representative.

Following on from his ‘neighbour,’ Eight And Bob rsquo;s win in the 2.50 event, Rathvinden was similarly smooth in victory.

Favourite Magic Of Light made a bad mistake and unseated Robbie Power at Ballyhack (eight fences from home).

Supplying Closutton with its fourth Bobbyjo in a row, and eighth in all, Rathvinden moved sweetly behind Alpha Des Obeaux in the straight.

Absent for 305 days, Rathvinden took over from before the last to triumph by three and a half lengths.

Townend is now on to the 87 winner mark for the campaign, 6 ahead of Rachael Blackmore on 81.

“That was a nice first run of the season, and I’d imagine he’ll go for the National. That would be the usual route from here. We’re keen to go and the owner is keen to go," said Mullins.

“He was really firing at home and I was really happy with him. I’m just wondering can we get another few vaccinations into them as it doesn’t seem to be doing them any harm!

“He’s a horse that’s had his troubles over the years and he’s good and sound now so he may not have another run before the National. We’ll see how he comes out of this race first.”