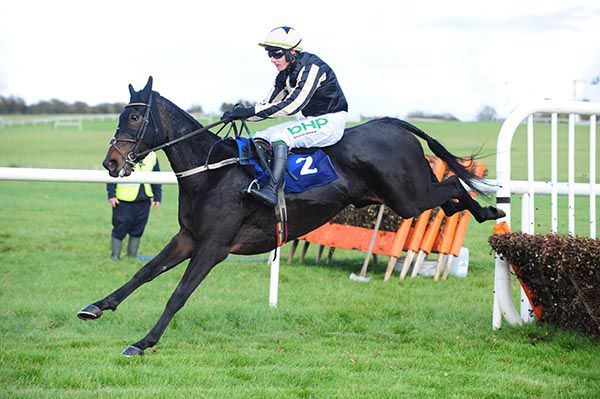 With an air ambulance carrying the injured David Mullins gone from the scene, the Thurles Mares Maiden Hurdle got underway 33 minutes behind schedule. Mullins’ uncle Willie took this as Rebel Og justified even money favouritism.

Paul Townend won it from the front on Rebel Og and the victorious daughter of Presenting accounted for Flicker Flame (9/4 second market choice) by four and a half lengths.

"That was her fourth run over hurdles and she was pretty forward going the last day and made a stupid mistake and fell, but her jumping up until then had been very good. That probably opened her eyes for her and that's why we made the running over two miles today," reported Townend.

"We kept it simple and the job was made a lot easier when Queally's mare (6/4 favourite Uisce Solas, withdrawn due to a vaccination error) came out.

"I thought the race in Listowel rode a good race and she probably needed the run at Downpatrick and they'll have a bit of fun with her."

The Stewards granted permission for a delay to the new off time of this race to facilite an medical emergency.