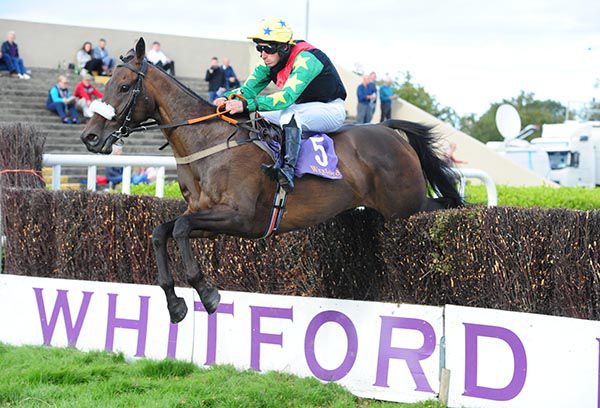 Rudy Catrail blitzed his rivals in the concluding handicap chase at Wexford to give trainer Dusty Sheehy a double on the card.

It was a red-letter day for the trainer as his son Mikey booted home his first racecourse winner on the Flat card at Navan today.

The eight-year-old gelding raced clear throughout and sauntered in by a whopping 17 lengths in this extended three mile one contest.

Dusty Sheehy said: "It was great to see Michael having his first winner above; he is 16, is light and I'd say he'll go well at it. He has 190 pony winners ridden and is apprenticed to Joseph O'Brien.

"It's been a nice day for Michael and myself and it's nice to get back into the winner's enclosure and especially with a double.

"Getting horses is everything and I've only a handful of horses but have a couple of nice young horses to run.

"This horse won two point to points but I was running him over the wrong trip. I said I'd try him over three miles after his run the last day and he did.

"Shane (Fenelon) is 21 and from Wicklow and that's his first racecourse winner. He has ridden two point to point winners, his first on this horse, and he rides out in Shark Hanlon's. He comes to me after dinner and is one of the hardest working young lads I know and that's why I gave him a chance. He gave him a great ride and is plucky and does what he is told."