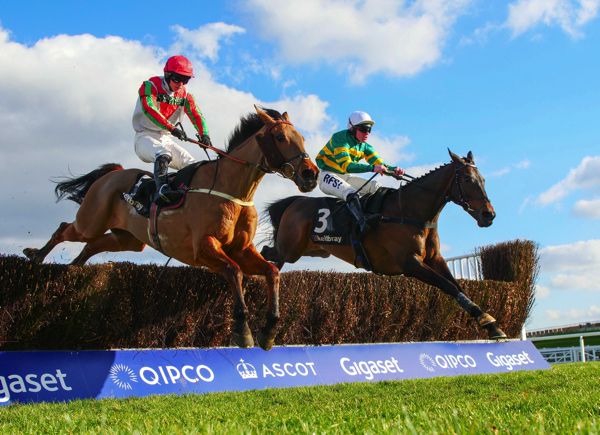 Regal Encore could be given another outing over the famous Grand National fences at Aintree in the Randox Health Becher Chase.

The three-and-a-quarter-mile contest on December 7th is one of two Grade Three options being considered by trainer Anthony Honeyball for the 11-year-old, along with the Ladbrokes Trophy at Newbury seven days earlier.

Beating just one home on his penultimate start at Chepstow, the JP McManus-owned gelding, who has run in two of the last three Grand Nationals, left that effort behind when finishing second in Grade Three at Ascot last time out.

Honeyball said: "I was delighted with his run at Ascot. It looked like he might only be fourth, but he stayed on from the last lovely.

"If the weather is OK, it will be between the Ladbrokes Trophy and the Becher Chase.

"They will go an end-to-end gallop in the Ladbrokes Trophy and he loves filling up in those sort of races and he finished third in it off 150. If he runs to that level again, he might finish sixth or seventh.

"I think I would be in favour of the Becher Chase, as it is the race he is more likely to win, but if it was really soft or heavy, it would be a hell of an ask jumping those National fences."

Honeyball has already drawn up a contingency plan should Regal Encore fail to feature in either race ahead of his mid-winter target - the final of the veterans' chase series at Sandown in January.

He added: "The back-up plan if we bottle either the Ladbrokes Trophy or the Becher is to perhaps have a go at the cross-country chase at the next Cheltenham meeting, or the Listed chase he won at Ascot three years ago.

"He has qualified for the veterans’ final at Sandown and is on a very dangerous mark for that sort of race.

"It is normally run on soft, tacky ground, but it is still worth taking a chance with him in it."