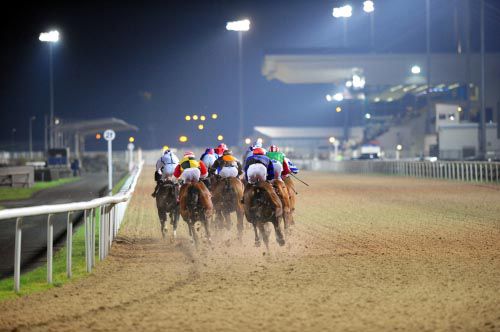 First time cheekpieces worked a treat on the Pat Murphy trained May Remain as he claimed the BetVictor Bet E5 Get E30 Offer Handicap.

A dual winner in the UK when trained by Paul Cole, the son of Mayson failed to score in eight starts for Richard O'Brien before joining current connections in the early summer.

A solid fourth of twenty-three on his penultimate start at Navan, he since disappointed at the Co Meath venue and was sent off at 8/1 this evening.

Settled in a close second by Gavin Ryan, the four-year-old victor got to the front over a furlong from home and kept on well under pressure from there, going on to score by a length and three parts. Ty Rock Brandy who was backed from 4s into 11/4 favouritism on-course, finished second under Ronan Whelan for Natalia Lupini, while Pillar (7/1) was a neck back in third under Colin Keane.

"He's been running well on the grass without finishing out his races and that was the big thing with him this evening," said Ryan.

"Pat told me to jump and be as handy as I could. We were drawn nine so we hadn't a bad draw, he said jump and keep at him as he thinks he might be holding back a small bit.

"Obviously cheek-pieces were a big help to him today and just kept him up to his job.

"When he hit the front he stayed straight and quickened up well away from them. He was well due that and it's nice for him to get his head in front at last.

"Pat does well with the horses he has. Every time he runs them he gets them back fresh and they run well, very consistent."