Revenge goes one better back at Punchestown 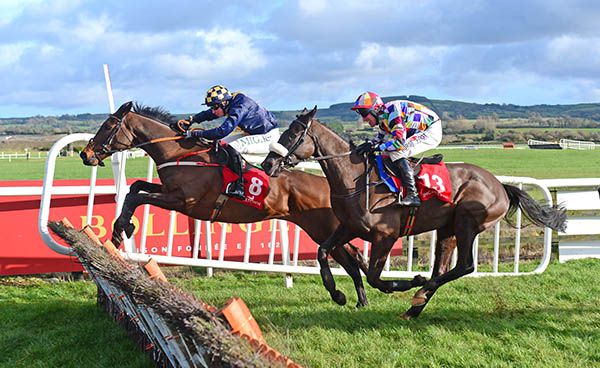 Take Revenge galloped his rivals into submission in the two-and-a-half mile maiden hurdle at Punchestown.

The Martin Brassil-trained gelding took them along under Donie McInerney and got the field on the stretch turning for home. Discordantly pressed the leaders at the final flight but Take Revenge responded well for pressure and asserted again on the run-in to record a two-and-a-half length success.

The 4/1 winner was last seen when chasing home Tornado Flyer over course and distance in early December.

Brassil said:- “We were delighted with his run here the last time and kept it in mind that we might as well go back to where he ran well. It was borderline with the ground but when I looked at it today I was happy with it even though he would like it a bit easier.

“He’s a very uncomplicated and straight forward horse. I learned through the years from all the big guns that you just need to be in the first two and the horses have to jump. If they are good enough they will get the job done.

“When he went for him after the last he picked up again. Chasing is going to be his game. He’s won his point-to-point and jumps fences very well. He’ll go chasing in the autumn.

“He’s in the Ballymore but I only put him in as an afterthought in case anything happened the other horse (City Island).

“City Island took his race very well. He ate up and is out in the paddock for the day. I’ll just try and keep him in the same frame of mind and same level of fitness. The race will have done him good.”