Rightplacerightime for Foley and O'Donnell 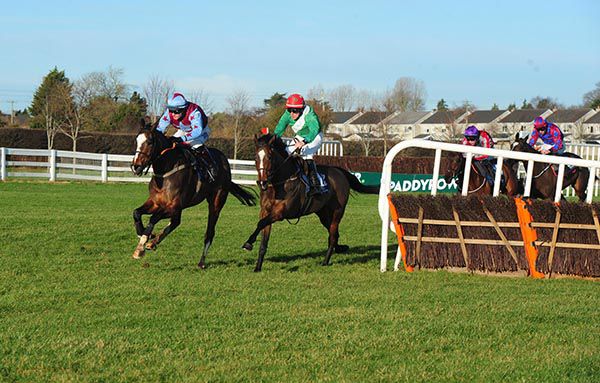 Barry John Foley stepped in for the ‘spare’ in place of Liam Quinlan on Righplacerightime in the Des Hipwell Naas Member Maiden Hurdle and he proceeded to land the honours for owner/trainer Kevin O’Donnell.

Unfortunately the two hurdles in the straight were taken out here owing to the low-lying sun.

Second favourite Rightplacerightime was badly interfered with by eventual second placer Capilano Bridge leaning in on him after the bypassed last.

Credit to the victor though, as he was brave burrowing through on the rail to score by a neck. In truth he was lucky not to be put out through the rail. He didn’t deserve it, but on returning in his first-time tongue-strap, the Kalanisi four-year-old had a bloodied mouth. It appeared to be only superficial. Colour Me In (10s into 6s) finished five and a half lengths off the front pair in third, whilst market-leader Golden Nomad was fourth.

“The form of his last race was very good, very solid. Poor Liam was laid up this morning at the last minute, Barry came in and rode a very nice race for me.

“It's a family we're very familiar with. He's one I bought and he's from Aine Dubh's family. We know how to train that family.”

The Stewards enquired into an incident from the time that the final hurdle was bypassed involving Capilano Bridge, ridden by R.A. Doyle, placed second and Rightplacerightime, ridden by B.J. Foley, placed first, where it appeared that Rightplacerightime was hampered when racing close to the running rail.

Having viewed the recording of the race and considered the evidence, the Stewards were of the opinion that the incident was caused by R.A. Doyle riding carelessly, this being a breach of Rule 214.

Having taken his previous record into consideration, the Stewards suspended R.A. Doyle for 4 racedays

H. Morgan, rider of Hide Out trained by P.J. Rothwell, reported to the Clerk of Scales that his mount never travelled during this race.