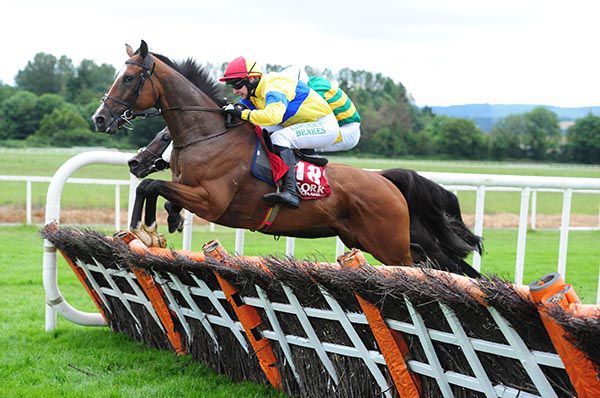 On his only mount of the day Landers switched Rip Rock Paddy Ok to the left to deliver his challenge from before two out.

Front-runner and favourite Fightfortheroses made a mistake here and Rip Rocks Paddy Ok was then much stronger from the last. The margin between the pair at the line was six and a half lengths.

"Padraig (Mullins, owner) has been with us from the start and it's great to get a winner for him and we're going to bring him to Galway now for the four year old hurdle on the Monday," said Brian Slattery, brother of winning handler Andy.

"He was very weak last year and his flat form was very poor. He doesn't back up his races very well and that's why we space out his races and it took us a while to get the hang of him.

"We'll stay hurdling for now but we might get to a stage later on where we'll have to do something and could then go back to the flat."

Sarah Kavanagh, rider of Dani's Boy trained by P.A.Fahy, reported to the Clerk of Scales that her mount was flipping his palate during this race.

The Irish Horseracing Regulatory Board Veterinary Officer examined Flooring Porter trained by Gavin Cromwell, at the request of the Stewards and reported the animal to be post race normal. Samples were taken for analysis.

The Stewards wished to enquire into the running and riding of Flooring Porter, ridden by J.M. Moore, and trained by Gavin Cromwell. Prior to seeking evidence Zoe Smalley, representing Gavin Cromwell, trainer, confirmed that she was not registered as an Authorised representative and furthermore a temporary registration form had not been lodged today at scales. Having considered the admission by Zoe Smalley, the Stewards referred the subject matter to the Referrals Committee in accordance with the provisions of Rule 147 (v). Mr. R.E. Rohan, Acting Steward, absented himself from this enquiry.