Room To Roam gets his turn 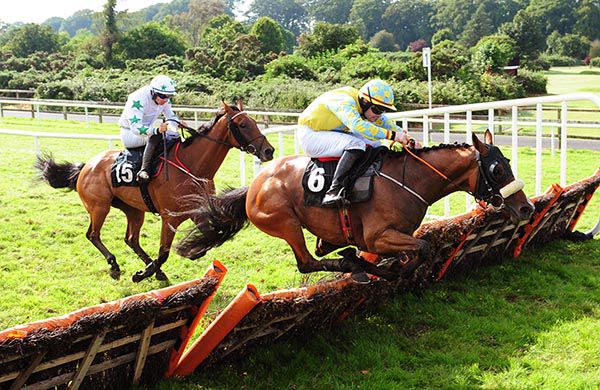 Room To Roam finally made the breakthrough over flights, as he ran out a comfortable winner of the Hibernia Steel Maiden Hurdle.

Successful on the level for Ger Lyons, the five-year-old son of Fast Company ran a cracker to finish second on his debut over flights at Leopardstown in December of 2017.

He failed to get his head in front on his next eleven outings, finishing a close-up fifth at Wexford when tried in handicap company on his last start.

Sent off at 4/1 this evening, the Peter Fahey trained gelding was settled in mid-division as World Stage soon raced into a clear lead.

His advantage was whittled away before three out, with the Kevin Sexton ridden winner making smooth progress to challenge before the next.

He eased to the front approaching the final flight and kept on well from there to score by a length and a half in the colours of the Adders Syndicate. Whenurgoodurgood (20s from 28s) ran a fine race to finish second under Conor Orr for Nigel Slevin, while Licklighter (4/1) was another three and a quarter lengths back in third. Baboin was sent off the 3/1 favourite and he finished a disappointing sixth.

"I'm delighted for him and for the owners," said Fahey.

"We bought him out of the horses in training sale and on his first run he was second to Mr Adjudicator at Leopardstown. We started dreaming about him.

"He had a few good runs in his first season and then lost his way. He suffered a bad injury here last year, he got a very bad cut, and he lost confidence and everything.

"He seems to be coming back right. It wasn't the strongest of maiden hurdles. He'll tip away and we'll find something for him.

"I think a fast run two miles suits him because he can get passing horses.

"In fairness to Kevin, we were trying to stretch him out in trip before to get him to enjoy it, but when he rode him first time he said to shorten him back up.

"It's worked today and fingers crossed he goes on.

"Kevin is riding great. He's knuckled down, he's tipping away and doing everything grand. He has struck up a great partnership with Peregrine Run.

"He is a good rider and I don't think anyone could knock him about his riding. I think that was his 100th yesterday on Peregrine Run.

"He's in the yard every morning and he deserves the opportunities he's getting at the moment."

The Irish Horseracing Regulatory Board Veterinary Officer examined Batcio (FR), trained by T.M. Walsh, at the request of the Stewards and reported the animal to be post race normal.

Mr A. McMahon, rider of Batcio (FR) trained by T.M. Walsh, reported to the Clerk of Scales that his mount never travelled and was pulled up.

M. Hamill, rider of Keble trained by John Joseph Hanlon, reported to the Clerk of Scales that his mount never travelled.

M.J. Bolger, rider of Five Gems trained by David Peter Dunne, reported to the Clerk of Scales that his mount made a noise in running.