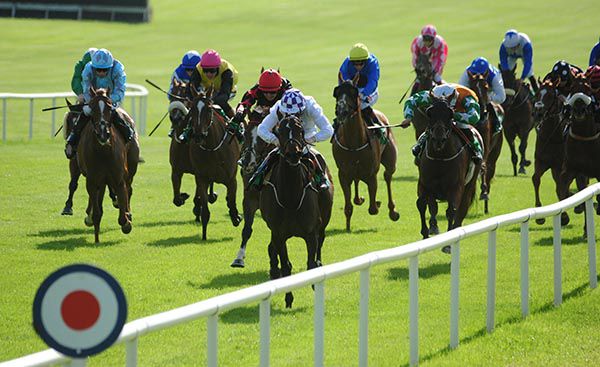 New Vocation has them all on the stretch
© Photo Healy Racing

Jim Bolger's New Vocation (10/1) won division two of the mile and a quarter handicap in Navan from the front with Gavin Ryan in the plate.

The four-year-old filly soon led and dictated throughout. The field closed up three furlongs out, but New Vocation had more in the tank as she began to increase her lead sweeping past the two pole.

She was ridden a furlong and a half down and moved clear in the final furlong. Lusis Naturea (12/1) kept on to close the gap to two and a quarter lengths at the line without ever threatening the winner. Royal Admiral (8/1) was a length and three quarters back in third and he was the same distance in front of Light Breeze also at 8/1.

“Gavin did a really good job to get across from stall 17,” said travelling head lad Ger Flynn.

“He gave her a very good confident ride and she held on well at the line.

“She's been knocking on the door and had a good run in Sligo when Rory (Cleary) rode her, hopefully he's okay after that fall.

“She'll probably go for something similar again.” Ally Cay reared in the stalls and lost all chance as she started in detached rear. She eventually finished 16th.

The Stewards enquired into an incident on the home bend involving Footsteps At Dawn ridden by T.P. Madden, Light Breeze, ridden by D.P. McDonogh, and Paddytheirishman ridden by R.P. Cleary, where it appeared Paddytheirishman came down and caused Footsteps At Dawn to unseat T.P. Madden. Evidence was heard from the riders concerned. Having viewed the recording of the race and considered the evidence, the Stewards found that the incident was accidental in nature and took no further action.