Secret makes all under Browne for Hanlon 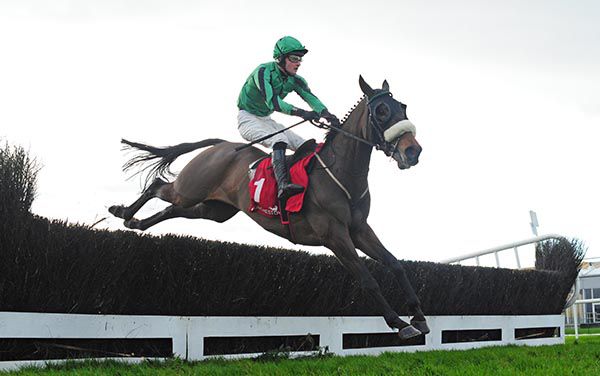 Peacocks Secret made it three wins from his last four starts, as he ran out a comfortable winner of the Adare Manor Opportunity Handicap Chase.

Successful at Wexford in October, the son of Court Cave followed-up at Naas, before falling on his most recent start at Clonmel.

Sent off the 3/1 favourite this afternoon, the seven-year-old made all under Barry Browne and had matters under control from before the last, keeping on well from there to score by two and a quarter lengths. Dundrum Lad (5/1) finished second under Liam Gilligan for Mags Mullins, while Oscar Lantern (4/1) was a short head back in third.

John 'Shark' Hanlon trains the winner, and he was completing a double on the day, having earlier took the opener at Tinahely point-to-point with Dime A Dozen.

"I got my own way in front and I was able to keep filling him up," said Browne.

"I was lucky enough on the bend passing the stands as he lost his hind legs, it's slippy enough. He did it easy in the end.

“I was talking to Rachael (Blackmore) beforehand and she said it wasn't like him to do that (regarding fall at Clonmel), he just lost concentration.

"It didn't make any difference today as he was still full of confidence.

"Shark's horses are in good form and I'd say there will be a nice chase in him someday."