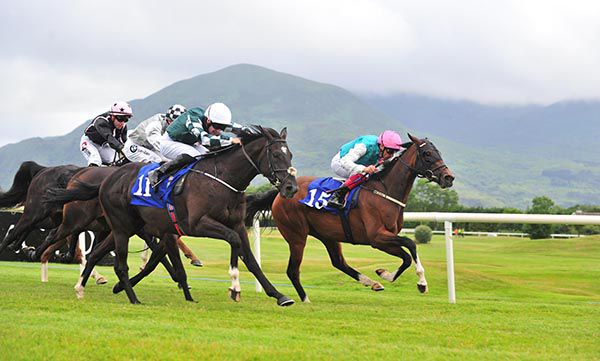 Jessica Harrington’s Tauran Shaman has plenty of scope for improvement when he contests the Bet With The Tote At The Galway Races Handicap on Wednesday.

The Shamardal colt got off the mark on his debut in Killarney a fortnight ago despite running green.

Afterwards, jockey Tom Madden reported that his homework had been good and that he kept picking up the whole way home.

The handicapper certainly has not underestimated his potential with an opening mark of 90.

The 140-rated Dancing On My Own bids to get off the mark in the Tote Supporting Irish Racing Since 1930 Maiden Hurdle. However, Willie Mullins has a fine recent record in this race, so his Diamond Hill merits close scrutiny.

Perhaps she can build on a victory in a qualified rider’s handicap in Bellewstown, having shown an aptitude for this course at last year’s festival.

Mullins supplies Buildmeupbuttercup for the race Diamond Hill won last year — the Play The Tote Trifecta (Q.R.) Maiden — and this five-year-old mare appears to have an excellent chance.

Her runner-up finish behind The Grand Visir at Royal Ascot is form that leaps off the page.

Lightly-raced Scaglietti knows how to win and aims to enhance her record to four from five when she goes in the Play The Tote Superfecta Handicap for Mullins.

The Gigginstown gelding struck a rich vein of form in May and arrives seeking a hat-trick.

A patiently-ridden Buttons And Bows is likely to finish well up the hill in the Sign Up For A Tote Account Irish EBF Mares Handicap Hurdle.