She Is Electric off the front 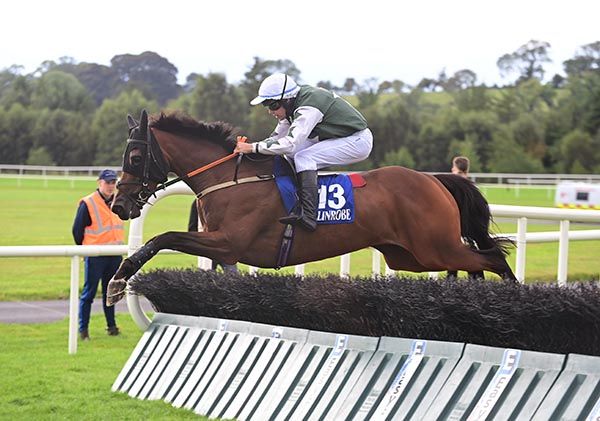 She Is Electric pops the last
© Photo Healy Racing

She Is Electric availed of a front-running ride from Robbie Geoghegan to oblige in the mares' maiden hurdle at Ballinrobe.

The 5/4 favourite picked up the lead after the first hurdle and increased her margin before the next. She was clear of Beyond Ambitious at the half-way stage and that pursuer in turn was clear of the remainder.

Beyond Ambitious wasn't fluent two out and soon began to toil in her attempt to reel in the leader.

She is Electric powered further clear as she hugged the rail approaching the last flight. Inclusion and a staying-on Roccos Inspiration went past Beyond Ambitious and set off after the leader on the long run-in.

She Is Electric had a reduced advantage in the straight and was ridden to keep the revs up in the final furlong. She had enough in the tank to prevail by three lengths from Inclusion (7/2). Roccos Inspiration was a head further back in third at 80/1.

Trainer Norman Lee said: "We always thought she was a proper good mare. We've had a few niggly problems training her. Eddie Naughton, who's a great friend of mine, owns her along with me and that's his first winner.

"She was well due that win and she'll go the novice route now. We'll keep her going while there's a bit of juice in the ground and Robbie gave her a great ride from the front."