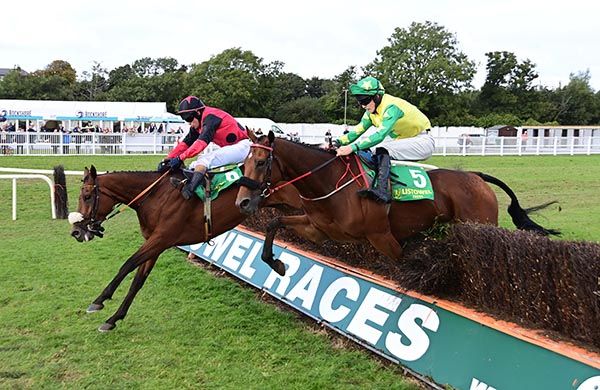 Galway Hurdle winning trainer Martin, has seen a huge upturn in fortunes this season, showing that he can still deliver at the highest level.

On this occasion, while the race may have been a lower grade handicap, his charge travelled particularly well before taking up the running early in the straight.

Peter Carberry had to be strong to hold the late challenge of Mattie's Mountain but a mistake by the latter at the final fence made the task somewhat easier.

"He is owned by a great bunch of lads from Dunboyne and it is great to see him click. There was a divided camp today because half of the syndicate are involved in Gordon Bennett (winner of the Joe McGrath Handicap at the Curragh) so we're low in numbers!

"He is consistent on the flat and his jumping won it. He was positive, his experience helped because if the last wasn't there it might have been a different result. That's what it's about, having enough runs in chases and it went the right way.

"We'll see how he is over the next few days as he is in on the flat at Down Royal on Monday."