Sinawann another promising juvenile for Halford 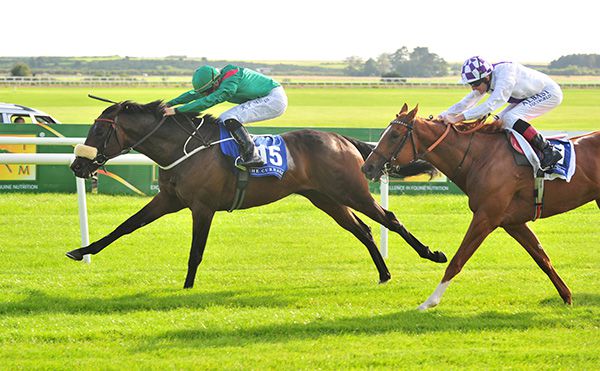 Michael Halford has some lovely two-year-olds this season and Sinawann (9/1) is another nice prospect for the Kildangan trainer after the Aga Khan-bred colt, from the family of Sinndar, took the Irish Stallion Farms EBF Maiden over the straight mile by a length from Agitare (7/1). Degraves (3/1 jt fav) was one and three quarters of a length further back in third, having been in front of the winner when both horses made their debuts over 7f here a fortnight previously.

The other 3/1 joint favourite Cabot Hills was seventh.

The winner, a son of Kingman, tracked the leaders before being sent for home over a furlong out by jockey Ronan Whelan.

"He had a lovely introduction here two weeks ago and he stepped forward well in his homework. He was always going to be better stepping up a furlong and I'm delighted,” said winning trainer Halford.

“It looked a good race on paper. He showed a good attitude, Ronan said he was there plenty early on him but I loved the way he knuckled down to it.

“We'll take him home and see where we go from there but he's a smart horse.

“He has entries in a good few races. It's nice to get that out of the way with him and I won't over-race him either. He's still quite babyish.

“I was keen to run him back off the back of his last run because he learned so much but I'll take my time now and he'll tell us.

“He'll probably have one more run before the year is out.”