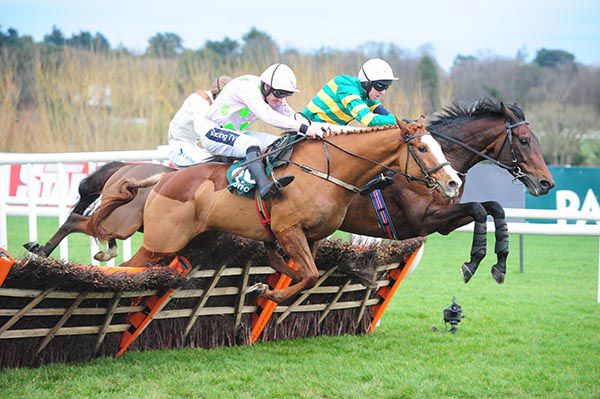 Joseph O'Brien's Sir Erec got the better of Tiger Tap Tap at the end of an eventful three-year-old maiden hurdle in Leopardstown.

Some 28 horses went to post but four horses fell, one slipped up and one unseated rider.

The 11/10 favourite arrived at the last between Bachelor on his inner and Tiger Tap Tap on his outer but it became a two-horse race when Bachelor crashed out.

Sir Erec and Mark Walsh got away from the final flight that bit quicker than Tiger Tap Tap (5/2) but the latter refused to go away and battled along the run-in before going down by a neck.

There was an eight-length gap back to Nibiru in third at 33/1.

Joseph O'Brien said: “He was obviously a decent horse on the Flat and he jumped well. His jumping will come on a nice bit for that.

“I was a bit nervous before the race because there was a really strong word for the second.

“I'm delighted to see him do that and he was tough from the back of the last when he had to be.

“Every horse in the race would have done loads of jumping but there were four or five fallers.

“You can only do as much as you can at home and then they have to go and run. He had always schooled nicely so it's nice to see him go and win.

“The ground has been so good for so long that maybe a lot of horses didn't do as much schooling as they would have other years.

“He'll probably come back here next as that makes sense. He stays well and he'll have to come on from that.”

Sir Erec won at Listed level on the Flat for Aidan O'Brien and was also third in a Group Two at Ascot in October. This was his first crack at hurdles.