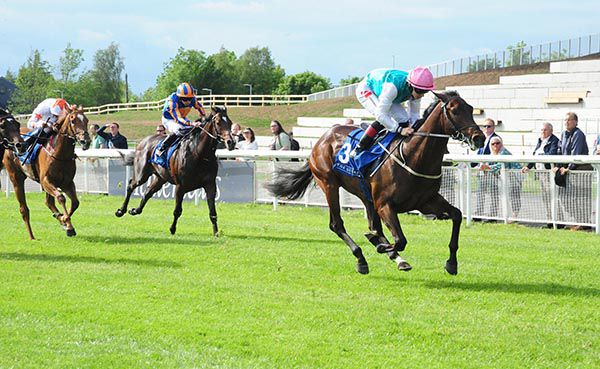 Siskin is out to enhance his already tall reputation in the Curragh’s GAIN Railway Stakes.

Trained by Ger Lyons, the Khalid Abdullah-owned colt was an impressive winner at Naas on his debut from Harpocrates — who finished fifth in the Chesham at Royal Ascot.

A fortnight later Siskin went to the Curragh, where he was not hard pressed to beat Aidan O’Brien’s King Neptune — who subsequently finished sixth in the Norfolk Stakes last week.

Lyons always had this race in mind — and while he was given an entry in the Coventry Stakes, he bypassed Royal Ascot for what had been a long-term target before the Phoenix Stakes at the Curragh.

“It’s a Group Two, so it would be hard to say he’s my best chance of the weekend, but he’d be my best horse going to war, probably.

“I don’t think he’s particularly ground dependent. Guys who know the sire (First Defence) better than I do tell me the faster the ground the better.”

Aidan O’Brien runs Monarch Of Egypt, who looked so promising when winning on his debut at Naas in April.

A son of Triple Crown winner American Pharoah, he unfortunately met with a problem which ruled him out of Royal Ascot but has recovered in time to take on Siskin.

O’Brien said: “The plan was to go to Ascot with Monarch Of Egyp,t but he just had a little setback and is ready to start off back at the Curragh on Saturday in the Railway Stakes — so we are looking forward to that. We are happy with him.”

Kevin Ryan sends over Romero a son of Australian sprinter Brazen Beau who won impressively on his debut at Doncaster.