Siskin so good in Railway 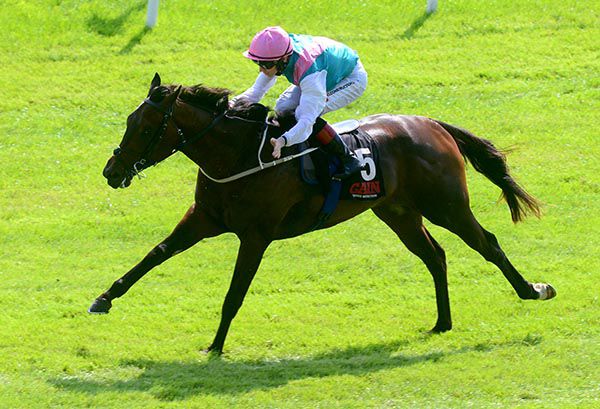 Ger Lyons looks to have a potential star on his hands after Siskin maintained his unbeaten record with an impressive win in the Gain Railway Stakes at the Curragh this afternoon.

The Khalid Abdullah-owned son of First Defence went to post a heavily supported 4/6 shot for the Group 2 prize and the confidence in him proved well founded.

Colin Keane tracked the leaders on his mount before letting him ease into the lead passing the two furlong marker.

The colt was asked to quicken away passing the furlong pole and soon had matters in hands. Keane could afford to coast home near the line to record a comprehensive two-and-a-half length win over Monarch Of Egypt.

The winner was following up on his win in the Listed Marble Hill Stakes here last month and will now be aimed at the Group 1 Phoenix Stakes back here in August.

Ger Lyons, recording a treble on the card, said:-“First and foremost it's a huge result to be training for these people in the first place. To get a good one so early in our career with them is a bonus.

“I'm just one of those lucky lads because things are falling together for us. We have the best jockey in the country riding for us and Juddmonte are on the team now.

“My job is to just use the experience we've had in 20 years looking for these horses. We should know what we're doing at this stage and it's nice to have one."

When asked if the First Defence colt could go all the way to the top he responded:- “I don't know about going all the way, I wasn't confident about winning today.

“You don't win over here until you win because of who you are taking on. The plan was to come here and then go to the Phoenix.

“If we got beat today then we had to make a second plan but at the moment we're still on track.

“As Teddy said it's grand when a plan works. After the Marble Hill this was my immediate plan, and it was rude of me to be fair because I said it without discussing it with the owners.

“I've been beat in the Coventry and it's a lonely place to be in second or third. I love having winners in Ireland. If we have to travel I'll travel but I want to win races in Ireland.

“It's not about what I want to do but when I said that was my plan they backed me 100 percent.

“I made the entry at Ascot because I felt guilty after sort of forcing this route on them. On the Sunday morning before Ascot Teddy said 'what do you want to do' and I said I wanted to stick to the plan.

“At this minute the plan is still in tact.

“It's a great day but you are as good as your last winner. You couldn't pick me up off the ground the past week and people were telling me the horses were out of form.

“We're in a very competitive game over here and you can't win every race. This is a huge bonus.

“I said to Kerri in the stands that this is a cruel game because I've had two winners but if this doesn't win I'm going to go home disappointed. That's the game we're in.

“Hopefully we can get this guy in one piece to the Phoenix and hopefully he's still the best around at the time.

“He doesn't excite you, he's actually the opposite as he keeps you calm. I just know that he's going to go out and do it.

“I keep expecting Aidan to pull one out of the hat, because he normally does, and when he does none of us will be surprised but hopefully I can win that Group One.”

Keane said:- “He’s been very straight forward from day one, and he makes my job very easy.

“He settles and when you give a squeeze he goes away and does it. He’s a brilliant horse to have in the yard.

“I gave him a flick of the stick as I wasn’t sure where Ryan was and I didn’t want him to come and do me.

“I think he can go further as he’s so easy to ride and settles so well but time will tell.

“He walks around with his head in between his knees, and walking back in he doesn’t get fussed up about it.”

Boylesports, Betfair and Paddy Power all make the winner a 12/1 shot for next year's 2,000 Guineas.