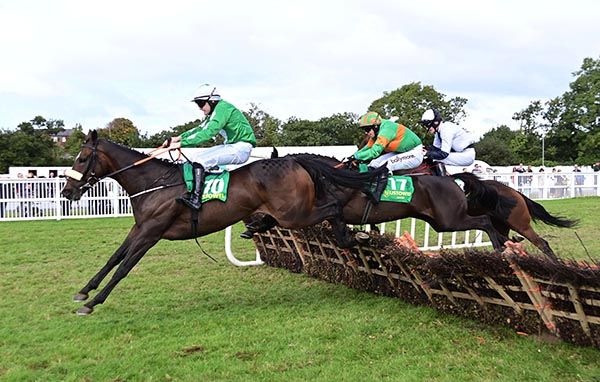 The son of Court Cave improved to lead when jumping right and across Listentillitellyea at the final flight and while the runner-up was badly inconvenienced, Skippin Court scampered clear on the run-in, under his jockey Kevin Sexton.

A length and three parts separated the pair at the line and the stewards left the result stand.

Fahey said “he had a good win over two miles under Neil Ryan at Sligo and on his last two runs he was slowly away but was getting home really well. He was finishing out his races fairly well so I thought the step up to 2m4f would work.

“He won here this day last year as well so that gave us confidence he'd handle the track and he is a grand horse. He will be a nicer horse over a fence as he has gone a little lairy over hurdles - he got there easy enough but was running around in front. He could go over fences soon enough.

“Gavin O'Toole runs the syndicate for friends and relations from Confey, Leixlip — they're staying down so will definitely celebrate.”

Fahey, who registered four winners at the Galway Festival, had been successful 35 minutes earlier with the Sam Ewing-partnered Ambitious Fellow (100/30).