Slattery back on top as Stormborn routs rivals in finale 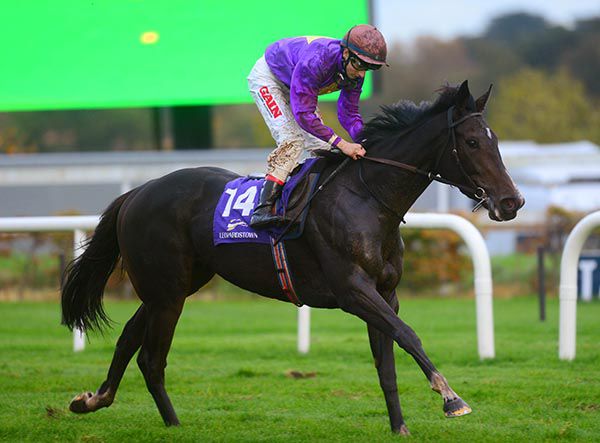 Andy Slattery's Lady Stormborn routed her rivals with a 14 lengths win in the concluding Leopardstown Members Club Maiden at Leopardstown today as the daughter of Camelot moved his son Andrew Slattery to the top of the Apprentice Jockeys' Championship.

Previously unsuccessful in two starts at Roscommon and Listowel, Lady Stormborn today showed vast improvement and simply cantered into contention on the inner turning for home before opening up for an effortless and impressive 14 lengths win on testing ground.

The win moves jockey Slattery one ahead of Oisin Orr (41-40) in the race to be Champion Apprentice and afterwards trainer Slattery later reported “I brought her away to work yesterday morning, she ended up only doing a blow out. She was so well and I've never seen her to go like it so I rang (agent) Kevin O'Ryan and told him she'd run and she'd win.

“The lads had a small few quid on her here, they weren't listening to me. She's a good filly.

“The last two weeks she's after turning the corner to being a real good filly. I'm going to check up now and see if there is a Listed race before the end of the season.

“If not we'll probably put her away to next season. I didn't look beyond today and she was actually going to Dundalk next Friday night but she was in here and worked so well, so we came here.

“The only little doubt was that we thought she likes good ground.