Slattery earns praise from Weld after winning on Highway 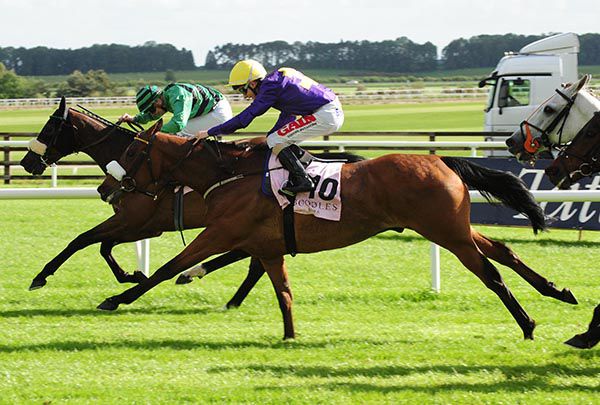 Dermot Weld and Andrew Slattery supplemented their Friday night gains at headquarters with Jassaar when Dalton Highway flew home to land a bit of a touch in the Boodles Handicap at the Curragh.

Seven pound apprentice Slattery conjured a storming finish out of Dalton Highway (9s into 13/2) to nab Tirmizi who had looked a winner from over a furlong out, by half a length.

It was just another half length back to Kerosin in third.

“I told Andrew to wait all day on him. He did his homework on the last two years of the horses form and had seen that Pat (Smullen) got up late on him at Killarney," said Weld.

“For a guy of his age to have done so much research was great, and he was thrilled when I said to try and do the same as Pat did.”

The Irish Horseracing Regulatory Board Veterinary Officer reported to the Stewards that Marine One (GB) trained by Denis Gerard Hogan was found to have blood at the nose following exercised induced pulmonary haemorrhage.

The Stewards interviewed A.C. Persse, rider of Shakespear'sgalley concerning his use of the whip in the closing stages of this race. Evidence was heard from the rider concerned. Having viewed a recording of the race and considered the evidence, the Stewards were of the opinion that A.C. Persse was in breach of Regulation 10.3(g) in that he had used his whip with excessive frequency and having considered his record, they suspended him for 2 racedays.