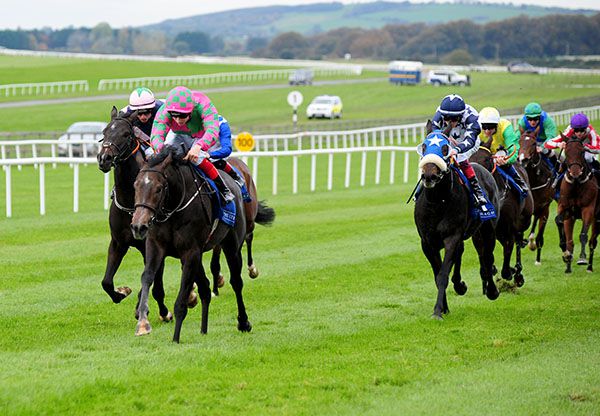 Andrew Slattery moved two clear of Oisin Orr in the apprentice title race as The King Of Kells made virtually all in the Curragh Training Grounds Nursery Handicap.

The Mick Mulvany-trained gelding, recording his second handicap win having also scored on testing ground here last month, got a soft enough lead and kept on well when asked for an effort from over a furlong out.

The 5/1 chance had a length and a quarter to spare over Strategic Fortune with Saphiri coming home well on the stands’ side rail another half-a-length back in third.

Slattery is now on the 42 winner mark for the campaign, two ahead of Oisin Orr.

Mulvany said, “I was a little bit disappointed the last day but it was exceptionally heavy ground in Gowran.

“He jumped out well and went early. He said he kept going. That's soft today but it's not bottomless.

“He'll probably go on his holidays now as he's done enough for this year. It's great to have him as he's a good honest horse. Hopefully we'll have a good few more days with him next year.”