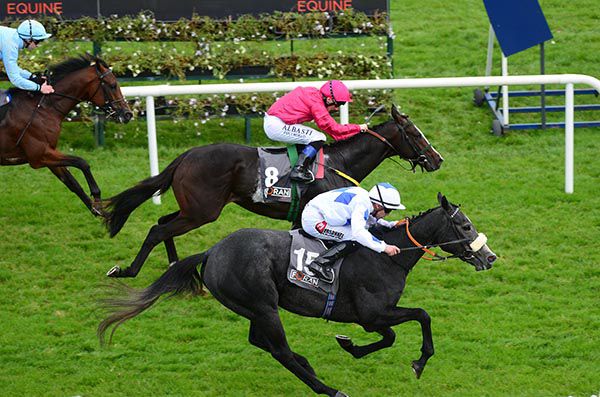 The valuable Foran Equine Irish EBF Auction Race Final provided a fairytale result for the Back Road Syndicate near Dunboyne as Lustown Baba carried their colours to success in the €120,000 Naas feature.

The syndicate was set up by breeder Laurence Sheedy who got a group of his friends involved in the daughter of Alhebayeb, who narrowly won a maiden at Cork earlier this month but it was even closer on this occasion.

The 12/1 chance was prominent throughout under Leigh Roche but just got the verdict by a short-head from Layfayette with top-weight Franklin Street running a cracker on the far rail a length back in third.

Winning trainer Willie McCreery said, “I’m thrilled for the syndicate. One of the syndicate owners (Laurence Sheedy) bred her and didn’t sell so all his friends got into her. They are from Lustown near Dunboyne so that’s how she got her name.

“I told Leigh to try and get a bit of cover but she just jumped too well. She fought them all and was brave up the hill. I’m delighted.

“I was a bit worried about the trip but she was working great. She might even run on Wednesday in the Forans Nursery (at Navan) as she loves the ground.

“It’s a great Series as you can buy fillies and look for these races and you are weighted on what they cost. For a syndicate like this to win that sort of prize-money is great.”