The West's Awake wins on return 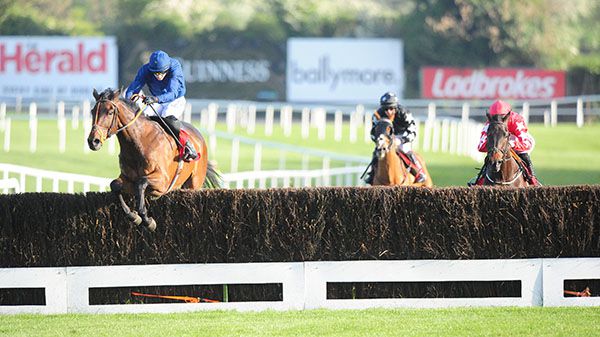 The West's Awake returned to action in the best possible fashion, as he claimed the feature at Punchestown this evening, the Punchestown Race & Dine Handicap Chase.

Successful three times in 2017, the Edward O'Grady trained eight-year-old failed to score in five starts last year, and was last seen falling at the final fence when still in with every chance at Killarney in August.

Given a break since then, the son of Yeats was sent off an easy to back 8/1 chance this evening, having been as short as 4/1 in early shows.

Settled behind the leaders by Bryan Cooper, he took closer order from five out and held a definite advantage from the third last. Supreme Vinnie who won this race twelve months ago, threw down a challenge from the next, but the winner found plenty for pressure on the run-in, going on to score by two and a half lengths.

The aforementioned Supreme Vinnie (12/1) had to settle for second under Rachael Blackmore for Denise O'Shea, while Dakota Moirette was third. Kildorrery was sent off the 11/4 favourite, and he was still in with every chance when unseating three out.

O'Grady said afterwards: "The owners (Mrs John Magnier) have been very patient as he hurt himself when he fell in Killarney last August. Ger Kelly in Fethard Veterinary did a great job as he had a chip in a bone in his hock.

"He was supposed to run in the Festival at Punchestown but when we schooled him he overreached himself and he couldn't run. He was off for about a week and I thought he might be a bit short today but he jumped himself there. He was probably the only horse that jumped well.

"Hopefully he'll improve and he'll probably end up in the west at the end of July. He might go for the Galway Plate qualifier in Kilbeggan."