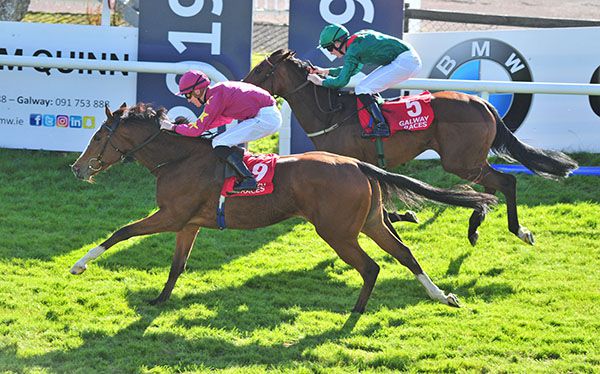 On start three the staying power of Thundering Nights came to the fore, as she was never stronger than at the finish of the extended mile heat, nabbing odds-on favourite Mazara near the line to triumph by half a length.

Mazara looked like she’d prevail when mastering Elfin Queen in the straight, but she couldn’t fend off Thundering Nights.

"Shane said she was never going but she has won with her ears pricked. When she turned in he said she went one way and then the other but once the penny drops with her she might be ok," said Joseph O'Brien representative Brendan Powell.

"She is tough and will probably end up being a 1m4f filly. I don't know the strength of the race but she toughed it out with her ears pricked.

"The other filly (fourth placed Blackcatblackitten) ran on well too and they actually ran together the last day too and finished about the same distance apart. They are two nice fillies going forwards."

The Stewards received a report from the Clerk of the Scales, Mr P.L. Malone, regarding the failure of C.P. Hoban, rider of Haparanda placed sixth to weigh in after this race. Evidence was heard from the rider concerned who stated that he was not made aware that he was required to weigh in and furthermore he did not realise that he had finished in sixth place. Having considered the evidence, the Stewards were satisfied that C.P. Hoban was in breach of Rule 227 by failing to present himself to weigh in. Having taken his previous record into consideration and mitigating circumstances, the Stewards ordered C.P. Hoban forfeit his riding fee and severely cautioned him on this occasion. Pursuant to Rule 230 Haparanda was disqualified.