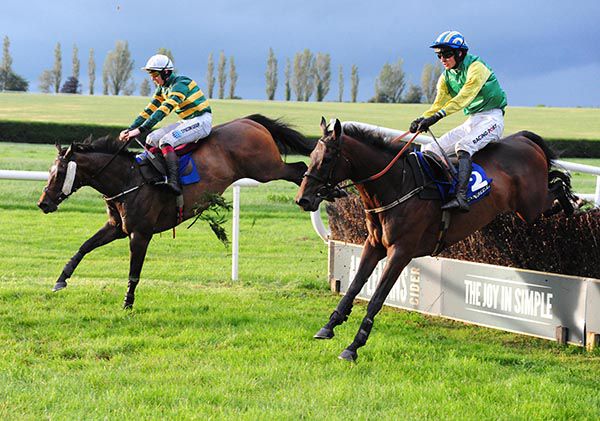 Successful in a handicap hurdle at Kilbeggan in June of last year, the son of Galileo failed to make an impact on his first four starts over fences.

He pulled up on his handicap debut at Punchestown in December, and was sent off at 8/1 this evening with Shane Shortall in the saddle for owner JP McManus.

Disko Musik fell at the first and hampered Comehere Hi who was subsequently pulled up after his saddle slipped. Captain Cobajay then fell at the fifth, with Treasure Chest hampered by both incidents.

The bay victor was sent to the front before the two out and despite an awkward jump there, he battled gamely on the run-in to see off challenge of Perfect Leader by half a length.

The runner-up was returned the 4/1 favourite under Danny Mullins for his mother Mags, while Allied Victory (12s to 8s) was a further two lengths back in third.

Brendan Powell, assistant to Joseph O'Brien, said: "In fairness to the horse something knocked into him at nearly every fence and he did jump a bit indifferently but he's tough in-between and stuck it out well to the line.

"He's hardy and hasn't run for a bit. He likes this sort of ground and will keep going over the summer."

R.A. Doyle, rider of Comehere Hi, trained by J.A. Nash, reported to the Stewards' Secretaries that his pulled up after his saddle slipped.