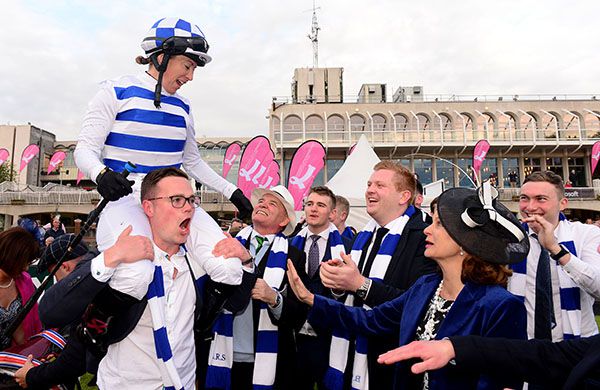 The four-year-old gelding is owned by the enthusiastic Blackrock Racing Syndicate, who carried trainer Joseph O’Brien shoulder high in the parade ring after winning last month at Naas, and Turner was given the same treatment this time by the former students of nearby Blackrock College. Torcello set a good pace under Aine O’Connor in this 12-runner event featuring a mix of riders from home and abroad, with Turner biding her time on the 100/30 favourite.

The top-weight made gradual headway to lead over a furlong out, and held the late surge of Take A Turn and Paula Muir by three quarters of a length. The Mouse Doctor kept on one paced just a neck back in third.

O’Brien said, “There was plenty of pace on and Hayley gave him a lovely ride and it worked out well. He’s an improving horse.

“The boys have a few top hats that they want to dust off so there might be something (at Royal Ascot) for him.”

A delighted Turner said, “The standard of girl jockeys has risen so much in the last few years. They are getting better and better, and days like this give them the opportunity to show how good they are.

“It’s a very good prize. I was quite lucky as my agent Steve Croft had a few to pick from and he chose the right one so thank you to him.

“It’s great for racing to have such a big brand as Microsoft sponsoring and the day is for such a good cause in breast cancer research.”