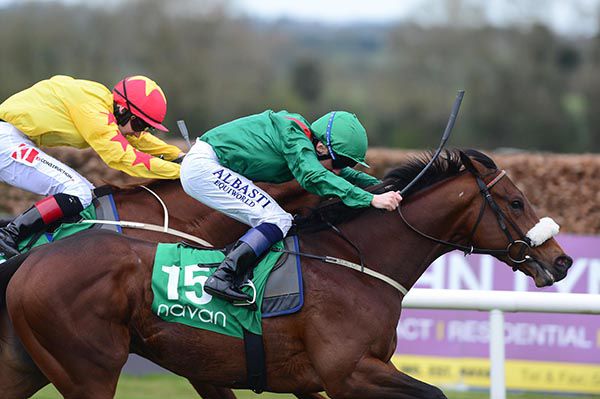 Sherkali followed-up on the promise shown on debut, as he took the first divide of the Arkle Bar Maiden.

The Dermot Weld trained son of Siyouni was a good third on his first start at Leopardstown last October, and was sent off a 10/3 chance to go a couple of places better this afternoon.

Settled behind the leaders in sixth by Chris Hayes, he was ridden to challenge in third from over a furlong out.

He kept on best from there to get the better of California Daddy (13/8fav from 3s) by half a length, with that one having to settle for the runner-up spot for the fourth time in-a-row.

The front duo pulled two and a half lengths clear of the grey Dunkirk Harbour (7/1) in third.

Weld said afterwards: "It was a nice performance and Chris said he got a little bit tired about 100 yards down which I expected. Our horses are coming along nicely and a couple of weeks will help them even more.

"I said to Chris beforehand to coax him in to win as I think there is nice improvement in this horse and if he gets beaten today it will be for a lack of fitness. He gave him a nice ride.

"We'll try and get black type with him next time and I see him as a potential Stakes horse. He'll be a nice horse going a mile and a quarter.

"He ran a nice race first time out as a two-year-old at Leopardstown when he got into a bit of trouble in running and finished out well. He battled well there today."

The winner holds an entry in the 2000 Guineas at the Curragh next month.

The Stewards enquired into an incident approximately two furlongs from the finish involving Taakhy (GB), ridden by D.A. McCormack, Insane Bolt ridden by D.M. Simmonson, and Red Gerry ridden by D.P. McDonogh, where it appeared Taakhy (GB) and Insane Bolt met with interference. Evidence was heard from the riders concerned. Having viewed the recording of the race and considered the evidence, the Stewards found D.P. McDonogh in breach of Rule 214 by riding carelessly and having taken his previous record into account suspended him for 1 race day.

D.P. McDonogh, rider of Red Gerry trained by Noel Meade, reported to the Clerk of Scales that his mount checked off heels in the straight.