Well-backed Trader bounces back to his best 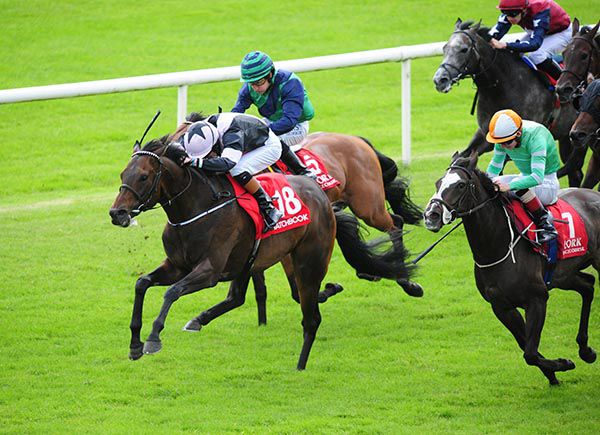 Mister Trader bounced back to his best, as he took the Matchbook Exchange Handicap.

A winner on debut at the Curragh back in 2016, the Darren Bunyan trained five-year-old then finished second to Caravaggio in the Listed Marble Hill Stakes.

He disappointed in nine starts since and dropped to a career low mark of 65, having once been rated 103.

Available at 28/1 in early shows, son of Hellvelyn opened on-course at 16s before going off a 12/1 chance under Nathan Crosse.

Awkward away from the stalls, the five-year-old bay soon tracked the leader in second and was ridden with over a furlong left to race.

He gradually reduced the deficit inside the final furlong and got up in the final strides to prevail by a neck.

In what was a bunch finish, Aspen Belle (7/1) finished second under Killian Leonard for Pat Martin, while Art Of Unity (14s to 9s) was a nose away in third.

The front-running My Laurete had to settle for fourth, while She's My Dream (7s into 11/2 favouritism) was a disappointing ninth.

"I couldn't be happier with him. He's a horse that has always had an awful lot of ability," said Bunyan.

"To be fair to the lads that own him (the Straight To Victory Syndicate) today is down to them as they've given me the time, I've never lost faith in the horse.

"He's had a lot of problems and you can see that by his runs. We've spent the last eight or nine months at home building back up his confidence again.

"It's been a long road with him but with the problems he had his confidence was shot to pieces. It's time well spent as we got the result today.

"He hasn't had a clean run since that day. In three years he's beaten ten horses on the track.

"That was the home-work he's been doing but he has to go and learn that on the track again too so I was kind of half nervous about today with him.

"I said to Nathan beforehand if he produces half his home-work he won't be beat.

"He'll climb well back up the ladder again, he's a good horse. If he comes out of this okay there is a 0-100 at Navan next week and we'll see how he is for that.

"I'm hoping his rating picks up again and we can get him into the Joe McGrath. I've no doubts about this horse.

"He's a favourite of mine at home. I've got a great kick out of that today, especially for the horse himself as he deserves it. It's great to see him getting a bit of confidence about himself again.

"I've had him in three times recently but things haven't been right so I've taken him out. I wanted everything to be right. There was no point undoing nine months of work at home in one day at the racing and that's what you could do.

"It's a credit to the lads that own him, they've been very very patient and that's what you get when you have good owners."

The Stewards interviewed G.P. Halpin, rider of Art Of Unity (GB), concerning his use of the whip in the closing stages of this race. Evidence was heard from the rider concerned. Having viewed a recording of the race and considered the evidence, the Stewards found G.P. Halpin in breach of Regulation 10.3(f)(frequency) and having considered his record, they suspended him for one raceday.

D.P. McDonogh, rider of Stanhope (GB) trained by Damian Joseph English, reported to the Clerk of Scales that his mount lost his action.